David Jackson knows how to podcast. He’s been doing it for 11 years, far longer than most fans of the medium have known it existed.

Jackson started his first podcast in 2005,looking up information in a pre-Google internet world and capturing his attention and curiosity. “I uploaded a file and saw it come down in my podcatcher and said this has a huge amount of potential,” he said. As a corporate trainer, he saw an opportunity to teach people vital information while also providing him a paying gig as the latest round of corporate downsizing meant his trainer skills weren’t in high demand for a short while. 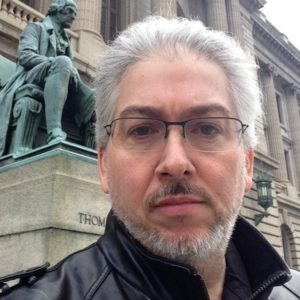 David Jackson is the founder of The School of Podcasting.

His first long-term podcast was an audio version of a newsletter he was already writing,The Musician’s Cooler. In April 2005, he launched The School of Podcasting, which has been running ever since.

Podcasting scratched a series of itches for Jackson. “It’s kind of geeky, the whole website, RSS feeds, the whole nine yards,” he says. “You can be as creative as you want. My biggest itch, being a corporate trainer, is I like to help people. I was able to do all of that.”

But what really made up his mind to dedicate so much time to podcasting was a phone call.

There’s a very strategic approach that Jackson takes to developing the material for his courses, building on a lifelong habit of taking notes.

His M.O.? “I’ve always wanted to help you avoid the mistakes I’m going to make,” Jackson said. “Let me be the crash test dummy. I’ll go in and figure out what’s going on and say, ‘OK, this is a really great tool as long as you don’t do this, this or that, and always do this.’ By doing that, I help you avoid headaches.”

But perhaps the most important piece of insight Jackson can offer is how much time podcasting really takes.

“I’ve timed it. It’s a four-to-one ratio,” he said. “If I want to do a 15 minute podcast, it’s going to take an hour,” by the time the subject is determined, research is done, the audio is recorded and edited and the final work posted, both in an audio form and written material used for promotion. “If you want to do an hour-long podcast? Congratulations, you’ve just sneezed away four hours.”

On  the week’s It’s All Journalism podcast, host Michael O’Connell talks to David Jackson, founder of The School of Podcasting about his 10-plus years as a podcaster and how he uses his experiences to teach others to do the same.

#223 – Are you part of journalism’s lost generation?