“Jacob, in 1989, was 11-years old. He lived in a small town, St. Joseph, in central Minnesota. One night, he went with his friend and his brother on a bike ride, around 9 o’clock at night, to get a video,” recounted Madeleine Baran, a reporter on American Public Media’s In the Dark podcast. The ride was short, on a dead-end road, but on the way home, the boys came across a man in the middle of the road. The man forced the boys into a ditch, asked them their ages, then told the other two boys to run away and not look back or he’d shoot them. 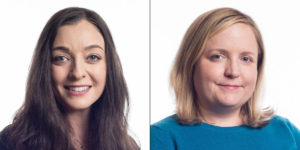 “The boys ran back to the Wetterling’s house, reported it to the police and the police got there right away,” Baran said. “A massive investigation began, with the National Guard, the FBI, the state’s crime bureau, the sheriff’s office. It was one of the largest missing persons operations in the United States.”

Yet from that day in 1989 until relatively recently, Jacob’s disappearance remained a mystery. The case is the subject of In the Dark, yet Baran and the podcast’s producer, Samara Freemark, didn’t set out to play detective or try to solve the case themselves.

“As an investigative reporter, I wanted to know what really happened here,” Baran said. “This is a case that seems, on the face of it, so simple and had so many resources, but it could not be solved.”

Instead, In the Dark looks at the responsibility to the public owed by first responders, investigators and others that were involved in the investigation of Jacob Wetterling’s disappearance.

“From a production standpoint, it’s an interesting challenge,” Freemark said. “The part of the story that’s most compelling, the plot of what happened, interested us least.” They didn’t want to be exploitative in their work, nor was that the focus of the podcast.

The central theme was whether the investigators, on all levels and from all organizations, lived up to their responsibility to the public.

The biggest challenge to telling that story was the fact that the case was still an open investigation, at least at the beginning, meaning the case file was sealed and unusable.

“There’s a confession, and the case file itself, hundreds of thousands of pages of paper — there’s a whole room in the sheriff’s office for it – none of that’s been released to the public,” Baran said. “We were trying to figure out what went wrong in a case where we did not have access to the files you have in closed cases.”

As a result, their research had to go a little more low-tech – there was no internet in 1989, after all — and involved newspaper clippings from the investigation and, in one case, literally digging through boxes for research.

As Baran was interviewing a former police chief, his wife remembered she had a video of coverage of the investigation into Wetterling’s disappearance. She was about to throw the tape out that week when Baran came by for an interview.

“She recorded everything of the early days, all the stations, all of it on one tape,” she said.

Free mark added: “For the podcast, in terms of production, it helps place you in the scene, but also for facts. Just knowing what was going on at the time. We did a clip review, we went through all the newspapers as well, but being able to see some of that stuff, the way it was covered on TV and radio, it was useful.”

On this episode of It’s All Journalism, host Michael O’Connell talks to American Public Media’s Madeleine Baran and Samara Freemark about In the Dark, their podcast investigation into the 29-year-old abduction case of Minnesota resident Jacob Wetterling. In the Dark does try to solve the case, rather it takes hard look at why it took authorities so long to solve the crime.

#224 – David Jackson schools us on podcasting