The road to becoming a Capitol Hill reporter was paved with city council meetings and panda pregnancies for Meredith Somers, a reporter with Federal News Radio.

The native of Columbus, Ohio, got her start in journalism in her home town, writing for a community newspaper after graduating from college in Connecticut. “I was covering my neighbors. … I was going down the street from my high school to listen to city council meetings.” After a while, however, she was ready for a change and, when some friends decided to move to Washington, D.C., for work, Somers packed up and made the move as well. 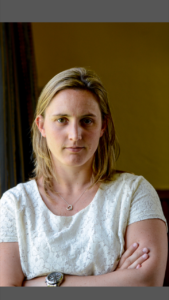 Meredith Somers is a reporter at Federal News Radio in Washington, D.C.

Working for the Maryland Independent in Waldorf, Somers went from covering city council to reporting on a county commission meetings “for an area where 60 percent of the workforce left every morning to work in DC. You’re dealing with a lot of educated, well-off residents who were federal employees. We were the ones having to do the job of telling them what was going on in the county,” she said.

The scope of her reporting expanded as well. “In Southern Maryland, you’ve got proving grounds and an army base and these beautiful wetlands and tributaries to the Chesapeake Bay and these big long undeveloped expanses of land. You go to the commission meeting with these big black SUVs and there’s a mom and pop store across the street that doesn’t want this big giant building coming in next to them,” she said. After a year and a half, she moved on to The Washington Times, working as a general assignment reporter covering the 2012 Democratic National Convention, the Occupy DC movement and pandas at the National Zoo.

“Panda reproduction is the most complicated thing,” Somers said. “They don’t just reproduce naturally. … These things eat bamboo but there’s no nutritional value in it, they have to eat too much of it because their stomach doesn’t tolerate it. They don’t like to have sex so they never reproduce and when they do, it’s a surprise. Every couple of months it’s she might be pregnant or she might just have gained a little weight. Let’s just hope she doesn’t roll over on it or eat it when it’s born!”

It was kind of exciting to be on zoo duty when Bao Bao was born, a year after the National Zoo’s panda delivered a cub that later died, but seeing people lined up at 3 a.m. to see the new baby panda on the first day it was allowed out for public viewing was a bit much.

Now, at Federal News Radio, she’s making big, complicated and acronym-heavy stories relatable, not just to the federal workforce in Washington but to readers across the country.

For example, the Department of Defense is trying to reconfigure its infrastructure of email servers. “Who cares,” she says. “But then you think, ok, if we went to war or got attacked, or if our family or loved ones overseas got attacked, you’d want to make sure everyone’s on the same page. It’s not always like that. This really does apply and it does impact more than the audience I know is reading this.”

On this week’s It’s All Journalism podcast, host Michael O’Connell talks to reporter Meredith Somers about covering the inner workings of the federal bureaucracy at Federal News Radio in Washington, D.C. Somers discusses covering community news and the challenges of making a complex subject relatable.