Every journalist comes to their respective newsroom in a different way, but almost all have a similar starting point: a high school English teacher.

For this week’s podcast, the three producers discussed their trials and tribulations in the newsroom, trying to find the humor and personality in covering the federal government and how to go about covering difficult stories in which reporters are treated as hostile witnesses to painful events. 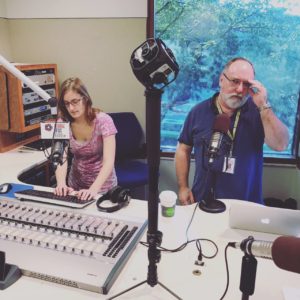 But mostly, it’s a discussion of the vast variety of odd news stories they’ve covered over their careers.

There’s the time Michael O’Connell went to a Star Trek collectable card game tournament. “The card company had released a set of new cards a few days before the event. Some of the people, who were very smart card players, realized there was a fault in the mechanism they’d introduced in this set. They were just cleaning up and knocking out all these people who’d spent months and months strategizing how they were going to win this thing. There was all this emotional turmoil going back and forth over this little card game. That was what the story was.”

Or when the Miss Springfield Pageant in Springfield, Virginia, crowned a winner on a Thursday night and, by Friday morning, the winner’s crown was in danger of being revoked. By the time the newspaper’s new issue went out a week later, a different queen was crowned and the pageant never took place again. It’s still one of Amber Healy’s favorite stories to recount.

For Nicole Ogrysko, one of her first journalism projects was covering the efforts to raise money for new cafeteria chairs. The headline on the story, “25 grand? I’d rather stand!” remains a fond memory. In her college newspaper, a series on the school’s cafeteria company may or may not have resulted in the service workers getting a well-deserved raise that she swears is not directly linked to her team’s reporting. “That was a huge learning opportunity for me. At that point, I didn’t know how to go up and talk to people and say hey, can you give me this thing you’re not allowed to give me,” she said.