Jessica Abel approaches her work as a cartoonist in the way a writer would approach putting words on a page. Telling a good story in either format, just as writing fiction or non-fiction, requires many of the same skills.

“Good writing is good writing, to a certain extent,” said Abel, an author, cartoonist and podcaster, who started writing comics in college and tried her hand at illustrating a non-fiction strip for the New City paper in Chicago in the early 1990s. She started drawing comics after reading Love and Rockets, which inspired her. “Instead of just being a reader, I wanted to be a maker,” she recalled. “It was the first thing I read that dealt with real people, real stories in the real world.”

That impulse has served her well over the years, leading her to experiment with telling stories combining written words with comics. 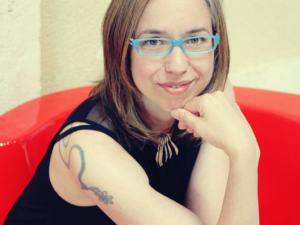 “Comics, like all art forms, have strengths and weaknesses,” including the ability to compress many concepts and events into a single scene or image. The use of word bubbles can help a reader fall into the pace of a story, speeding up or slowing down in rhythm with the story’s action. On the other hand, if a single narrator is in the middle of a monologue, in comics that could take pages and pages of illustration and the reader could get bored, she says.

There are elements of comics that work really well in prose, however.

When she decided to revisit Radio: An Illustrated Guide, a book she wrote with This American Life host Ira Glass, she wanted to expand on some of the original concepts and get into the weeds a bit more on the secrets of radio producers and how good radio programs are made.

“If you want to make audio that’s as strong as you hear on Radiolab or This American Life, these are the things these people look for,” Abel said.

One of her favorite aspects of writing her recent graphic novel on audio storytelling, Out on The Wire, was “translating this entirely audio medium to images, crafting metaphors for audio things. I think visual metaphors are incredibly instructive on how comics work. I knew I wanted to do this: Embedded in this book is what’s important for narrative, not just audio.”

For example, in one passage, a character she calls “Meta Ira,” named for Glass, pops into a scene in which soundtracking is discussed, the way in which music can be cut out of the background to let an important message stand out.

“Ira pops in front and says, ‘This is amazing. It’s totally true.’ When something’s important, you drop everything else out and you shine a light on it,” she said. “In the panel where he says it’s like dropping a light on it, I drop everything except Ira. The panels above are super busy. It’s very clearly like he’s spotlighted. It’s a way of talking about storytelling in general. How do you translate that to prose? I don’t know but I’m sure you could. Almost everything I do, when I talk about narrative in this way, has analogs in other media. I’m really interested in talking about those analogs and how to do things better.”

On this week’s It’s All Journalism podcast, host Michael O’Connell talks to cartoonist Jessica Abel about the differences and surprising similarities in audio and graphic storytelling. Abel is the author of Out on The Wire, a graphic novel about the storytelling techniques behind the popular Radiolab and This American Life radio shows.