When PRX was started in 2003, Kerri Hoffman wanted to find a way to preserve “great radio shows … being aired once and lost forever.” Now she’s helped to build a thriving network of podcasters through support, innovation and encouraging the entrepreneurial spirit of creative people interested in picking up a microphone and putting on headphones.

“Over time, we created the first mobile app for public radio, created a distribution system for public radio, the first one, that rivals the satellite system,” Hoffman said. PRX, an “early adopter” of podcasting, was a nonprofit media company established to preserve audio and, through a series of what many would believe to be very fortunate events, now helping to distribute some of the biggest names in the format, including This American Life, On Being and Reveal. 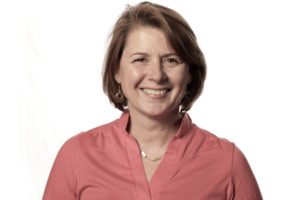 Kerri Hoffman is CEO of PRX.

Now PRX — Public Radio Exchange — has a system in place to help young entrepreneurial podcasters get started, which can be a lonely process.

“We’ve been doing this since the early 2000s, we’ve had a front-row seat at the kind of skills required now to be successful,” she says. “You have to be marketers and fundraisers and you have to understand the ins and outs of talking to people at ad agencies and know how to talk to designers. Some have that whole package and they’re like a rocket ship. More commonly, producers are great sound engineers, they’re great interviewers, they’re great sound artists. We take care of all of that technology infrastructure that allows you to be distributed far and wide.”

Hoffman also likes to look forward to remain on the cutting edge of podcasting. So what does she think will be of particular importance in 2017?

Included on a list of trends for podcasts this year, published by Radiotopia, Hoffman suggests that podcast will be more important than ever to encourage lifelong learning.

“The thing about podcasts is that there are so many niches,” she says. “Compared to broadcast radio, (which is) a curated experience for you … think of podcasts as bite-sized books. You can go in a lot, you can go in a little, it’s niche. You can binge. It’s got the intimacy of a real connection of experience.”

Podcasts also are a great way for people to consume information without having to look at a screen, so listeners can learn about any given topic while commuting, grocery shopping or at the gym, Hoffman says.

Another trend to monitor is the role podcasts will play in troubling times. This isn’t necessarily a political statement but rather a comment on the magnitude of shifting perceptions in the world. “One of the great things you can do (with podcasts) is you can match your listening to your mood,” she said. “We all need that variety, we all need a little bit of comedy, a little bit of entertainment, a little bit of broccoli with the ice cream. The real driver is the authentic voices and the intimacy people have with podcast hosts and producers. There’s a real connection that’s very power that listeners have with the shows they listen to and it extends to social media. It’s both short-form and long-form all at the same time.”

On this week’s It’s All Journalism podcast, producer Michael O’Connell talks to Kerri Hoffman, CEO of the Public Radio Exchange, about a recent PRX release outlining nine trends for podcasting. They also discuss the importance of good audio editing and what makes a successful and sustainable podcast.