It’s the one question asked more frequently in the weeks following the inauguration of Donald Trump and the steady stream of executive orders issued from 1600 Pennsylvania Ave. Can he do that?

For Allison Michaels, it’s the question at the heart of her new podcast for The Washington Post, in which she and a team of reporters and guests try to answer each week.

“After the election, we took an inventory of where the Post had succeeded and where we could grow. When we looked to the idea of creating a podcast in this space, we looked to the questions people wanted answers to,” she says.

Time after time, people wanted to know whether Trump could actually do all the things he’d promised as a candidate and, after the inauguration, the actions he set out to implement via executive order. The title of the podcast, “Can He Do That?,” was an easy decision.

The first episode launched the Monday after the inauguration and has been growing in reach and audience numbers ever since. As an editor, Michaels needed to learn how to think and ask questions like a reporter, so she turns to the team she has on hand to provide a nuanced, historical perspective on the topics at hand.

“One thing that makes our podcast operations at the Post even feasible is the fact that we have content creators and experts around the room that want to be a part of this,” she says. “One thing that’s really exciting about this podcast: We really are reaching audiences we wouldn’t otherwise be reaching,” including younger audiences and those living internationally, and there’s a particular interest among Canadians. 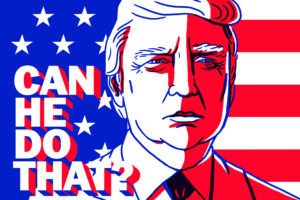 Can He Do That? is a weekly podcast produced by The Washington Post and hosted by Allison Michaels.

The preparation for each episode begins with a review of listener- and reader-submitted questions and suggestions. Then a reporter is identified as an expert source and they try to secure his or her “buy in” to work on the podcast that week, followed by someone who can provide historical perspective on the issue at hand. Great efforts are made to include voices from both sides of the political aisle, to refrain from muddying the already murky water with partisan politics.

Michaels says the listeners love the information they’re getting, in part because it includes that historical context.

“We reach people all over the world, with all different levels of knowledge,” she says. “For people with less knowledge, they find reward in a clear and easy understanding of this material. To the people who are tapped in, they have shared that they got something totally new out of this, which is a direct, clear answer to the questions that they have, but with the added context and added knowledge of Washington Post reporter expertise.”

It’s important to include as many voices as possible, as many perspectives as possible, especially on some of the more controversial actions that have been floated by the president, she says. Marty Baron, the Post’s editor, “has famously said we’re not at war with the administration, we’re at work.”

“What good, credible journalism comes down to is the ability to hold people accountable based on history, based on precedent, based on law and based on things that accountability is founded on,” she says.

Washington Post political editor Allison Michaels joins It’s All Journalism producers Michael O’Connell and Nicole Ogrysko in studio this week to talk about her podcast, Can He Do That? In each episode, Michaels and a her guests try to shed light on the limits of executive power as wielded by the Trump administration. The discussion also explores how newsrooms can use podcasts to expand on their coverage and engage new audiences.

Write a textbook? How about teaching?