Even the most openminded parties need gatekeepers.

News platforms and websites are no different says Daniel Ha, co-founder and executive officer of Disqus, the comment management system Ha created with a long-time friend just about a decade ago. They met as teenagers and bonded over their shared enjoyment in creating and building online communities, whether in the form of chat rooms or other online meeting spaces for likeminded people. 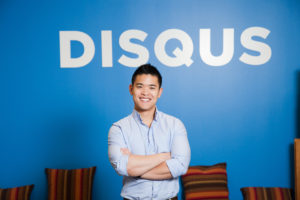 Daniel Ha is the executive officer and co-founder of Disqus, the commenting platform.

“Disqus started, now that I think about it, back then, we wanted to find a way to build for the future of online communities,” Ha says. He noticed, as the internet grew and expanded, that people were naturally collecting together within single-focused groups and, as that process evolved, a community leader and thought leader would emerge. “All these participants were becoming content creators. This thesis that the future of online communities and how they would plug into media online was evolving and it needed to fit with the online publisher’s interest.”

To be successful, an online community – or, in Disqus’ case, a network of online communities – needs to have a clearly set tone and expectations for behavior established.

“If you’re not going to be a host or set the tone for the party, is it going to be a frat party or a wine and cheese affair, and you don’t control the guest list, you’re going to have anyone and everyone in there,” cluttering the message and distracting from the topic at hand, he says. “Every single good online community that exists, whether it’s a subreddit or using Disqus or Facebook for comments (on a publication’s website), they thrive because they have people … paying attention, setting the tone and creating a good atmosphere for the best people to participate and driving off people who are just there to create trouble.”

If those troublemakers should find their way into a comments section, Disqus has new tools and methods on hand to address them. Unsurprisingly, it’s something that’s come up from users more in the past few months than in the past.

In addition to refining their profanity filter, the team behind Disqus is incorporating new tools that are “less of a hammer when it comes to banning people,” including a “time out” space where people are temporarily suspended from participating and posting comments. Another is stealthier: “You can ban a user and they can participate but the only people who see their comments are themselves, so they’re not incentivized to create a separate account and jump back into the fray.”

Ha and his team also are working on new toxicity controls, “using our data and working with partners to pick up on good moderation habits and using that to suggest actions on what content may be considered toxic, which ones might be hate speech or harassment. Those are tools we want to provide.”

Daniel Ha, executive officer and co-founder of the Disqus commenting platform, talks to It’s All Journalism host Michael O’Connell about how websites can engage their readers in conversations on their comment boards. He discusses strategies for keeping out trolls and developing a rich social experience with your audience.

#249 – Blake Gopnik and the art of art criticism

#251 – Tribeworthy wants to be ‘Yelp for news consumers’