In her career as a journalist and teacher, Deborah Potter knows the underlying skills needed to do the job well haven’t changed much.

“There are common issues journalists and newsrooms are dealing with,” says Potter, president and executive director of Newslab. “Writing is still huge. I still go into newsrooms and do writing workshops. There are still ways to improve your writing. That’s a passion of mine since I was a working journalist myself.” 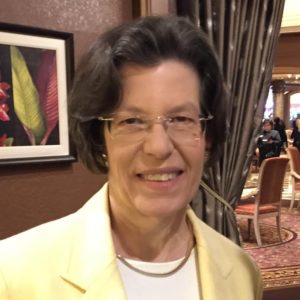 Deborah Potter is the president and executive director of Newslab.

Potter spent the first portion of her career at CBS News, working on both the radio and television teams. In the mid ‘90s she left network television after a stint with CNN and tried her hand at teaching, spending a year at American University in Washington, D.C.. She was recruited to the Poynter Institute in Florida and, after spending three years there she was recruited again, this time to help kick off Newslab.

“At the time (it was) a one-year, let’s see what happens project, funded by the Park Foundation,” she says. “The goal was to figure out a project to help local television do a better job of covering important stories.”

Funding for the initial year was extended for several more, but then Potter and her team were left to make it viable. Newslab offers trainings and workshops to newsrooms, providing tools and insights on how to continually adapt and improve media practices to best serve readers, listeners and viewers.

“We no longer focus exclusively on television. We’re doing a lot of stuff with digital and how you can tell stories on different platforms differently, and you should because they really are different,” she says. “When ‘new media,’ as it was called at one time, first started, you could just take the same story and essentially present it on different platforms. … I hope that’s not what people are doing anymore. Stories need to be told differently.”

For example, Potter recalls early advice to not try and do too much with video on websites because “you can’t tax these pipes too much. Now everyone’s got HD video in their pocket. It’s changed a lot in terms of what capacity is. The ways you’re going to tell a story have changed.”

Deborah Potter, president and executive director of Newslab, draws on her career as a broadcast journalist at CBS News and CNN, to help train newsrooms on how to make the most of what “new media” has to offer. She offers her take on the current state of digital media and interviews It’s All Journalism host Michael O’Connell about his upcoming book, Turn Up the Volume — A Down and Dirty Guide to Launching a Podcast, to boot.