Reporters have beats, starting each day with an understanding of what’s expected of them and their work for the next few hours.

Cartoonists wake up with a blank slate, a clean screen, with a looming deadline and no shortage of stories to illustrate. 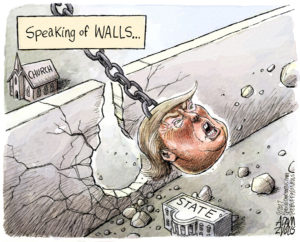 Adam Zyglis, the Pulitzer Prize-winning cartoonist for The Buffalo News, starts his day responding to readers.

“I feel responsibility to reply to readers and engage them and get the conversation going,” he says. After that, he’s left to ponder whether his editorial cartoon for the day will be local or national, something that reflects his life as a father in view of a bigger story or divining a way to make the international reflect the city he serves.

“Reporters have certain beats but editorial cartooning, anything of interest to the reader is fair game to you – sports, education, local issues, state issues, national, international. The struggle is to stay as current as you can and stay informed enough” to get a salient point across in a small space.

A constant consumer of news, between NPR on the car radio and talking with and reading the work of his reporter colleagues, Zyglis believes cartoonists draw what they know and, in some sense, what they feel. 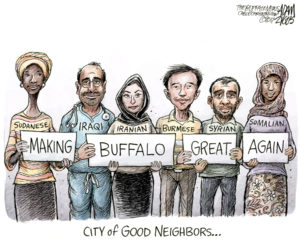 “I think a lot of cartoonists, one tool we use it to take a part of current culture and use that to make a statement on current events we’re talking about,” he says. “I’m always consuming whatever’s out there and following my colleagues as inspiration. I try to be original, but every cartoonist should see what’s out there.”

Oddly, Zyglis didn’t major in art in college. “I was raised by super practical parents and was talked out of art school,” he says. Instead, he studied computer science and math, thinking he’d bring together the left and right sides of his brain in computer graphics. The suggestion of an Honors English professor to draw for the university paper moved things in a different direction.

“Math, you’re working in symbols. You break down a problem into an abstract formula and create a solution,” he says. “Political cartoons are all symbols. If you look at expressing an opinion as a problem you need to solve using creativity, it’s like in higher maths, solving theorems.”

He also likens editorial cartoons to poetry, using symbols and select phrases that could have multiple layers of meaning to convey a message.  It’s a technique he uses often and one that was noted by the Pulitzer Prize committee awarding him the honor in 2015.

Pulitzer Prize-winning editorial cartoonist Adam Zyglis of The Buffalo News tells It’s All Journalism producers Amber Healy and Michael O’Connell about the challenges of covering the current political climate. He also talks about he tries to highlight the important stories that often get overlooked.

Exercise 4 – Editing an Audio Interview for a Podcast