Plenty of public events have been jokingly turned into bingo-style drinking games, but there’s a new game designed specifically to help promote media literacy and distinguish fake news from the real thing. 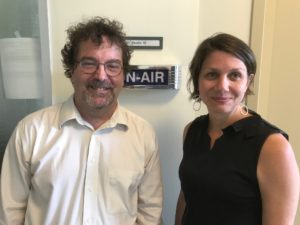 Robert Hone, acting director of the American University Game Lab Studio, and Maggie Farley, a professional fellow with the Journalism and Leadership Transformation (JoLT) program at AU, have developed Factitious to be just that. Players are presented with a headline and an article and are told to swipe (on mobile devices) or click to indicate whether an article is real or fake news. There’s a button at the bottom of the screen to provide source information for those players who want to do some sleuthing.

Oh, what simpler times those were.

Hone decided to use his contacts with expert programmers and artists and, with a budget of $10,000, they “went through and did a bunch of testing. There was a really positive response.”

The inclusion of a “source” button was one of the early modifications to the game. Originally the button said “hint,” but “game players hate hints. It feels like cheating” and no one clicked on it. The change to “source” has made a difference, Farley says.

When an incorrect answer is selected, “you get feedback that tells you why you were wrong. If you thought it was fake, it tells you, this is what you missed,” Hone says. “That’s a little piece of information that hopefully people will take forward.”

The Game Lab also is working with the National Institution of Mental Health on a game to help children with severe anxiety, he adds.