The most challenging hurdle to clear when starting to research a piece is getting people to agree to be interviewed.

Mark Bowden, author of Black Hawk Down and, more recently, Hue 1968, says the key is to demonstrate to a potential interviewee  “you’re genuinely interested in the truth and will treat them fairly.” 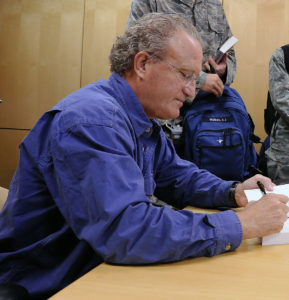 Mark Bowden, author of Black Hawk Down: A Story of Modern War and Hue 1968.

Speaking with Scott Maucione, defense reporter at Federal News Radio, about his new book, which explores a month-long battle during the Vietnam War, Bowden says it was often on his second or third conversation with someone that they’d start to relax a little and open up more. Questions asked during initial interviews also help jog memories and bring back details of events that, like those in the book, took place decades before.

Still, when talking to military veterans, often there’s some reticence to open up at all.

“Persistence is valuable,” Bowden said. He was invited to the memorial service for one of the soldiers killed in Somalia during the operation in which a U.S. Black Hawk helicopter was shot down. The soldier’s father introduced Bowden to other soldiers. “With any group like that, say, special operations or Rangers, once one or two people break the wall of silence, more people are likely to come around. If you’re in the trust of one, he’ll recommend you to someone else. Generally, I find people are eager to tell the story. It doesn’t take that much to, if you have the time, to allay their fears that you have an agenda or you’ll make them look foolish or you’re not interested in the truth.”

It’s also crucially important to be prepared with an idea of what the framework should be for a story, the key points that need to be examined and researched, but to let the interviewee lead the conversation.

“It’s a bad idea to sit in front of someone and ask a list of questions,” Bowden said. “It’s important to listen carefully to what they tell you and let the conversation go in the direction the interviewee wants it to go.” He’d rather have his subject navigate the memories of an event, rather than try and direct it.

Special guest Scott Maucione, defense reporter at Federal News Radio, interviews Black Hawk Down author Mark Bowden about his journalistic style. Bowden just finished writing Hue 1968, a book about one of the most harrowing battles in the Vietnam War. The interview covers Bowden’s approach to research, as well as how he interviews his subjects and gains access to people who aren’t always eager to be interviewed.

#261— Being flexible and listening key to a good interview