Sonya Gavankar has worked at the Newseum for most of the establishment’s 20-year history. She’s learned a thing or two about reporters in the process, including their uncanny ability to turn every situation into an interview.

The trick to interviewing journalists is to make them feel “like they’re at a cocktail party with friends, talking about the stuff you never get to talk about” from their reporters’ notebooks, the extra details that don’t find their way into stories, says Gavankar, the Newseum’s manager of public relations. 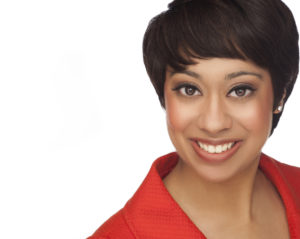 “We can read everything they write and listen to all the radio shows, but I want to hear the stories that don’t make it into regular reporting. It frees them up to tell the fun side of their personality,” she said.

It’s important that interviewers be flexible and let the subject do the talking, not putting too much weight on sticking to a predetermined list of questions.

“When people prepare and they have their order of questions and they go through it and in their mind they have what they want to do, they’re not opening themselves up to have a conversation, a back-and- forth, to be open to the fun things that might come out of the interview. Laugh sometimes. Be a human being.”

A one-time Miss DC — “I did it as a joke”— and graduate of American University, Gavankar wanted to be a journalist since the time of the first Gulf War, in the early 1990s. She saw the three anchors on network TV and instantly thought she could do the job better. “My mother turned to my father and said, ‘She’s never coming home.’” But instead of becoming an anchor, likely because she didn’t want to follow the traditional path and leave Washington, she’s been at the Newseum.

That work has “allowed me to expand the skills I have and expand the way I do my work, so I’m a lot more flexible and more nimble to be in the field of journalism,” she said.

It’s also given her the opportunity to take on a job that most journalists would jump at the chance to take: She’s hosted the Puppy Bowl.

“This is why you go to journalism school, to read a teleprompter while holding a puppy,” she laughed. “It’s surreal and fun.”

Sonya Gavankar, manager of public relations at the Newseum in Washington, D.C., discusses her unorthodox journalism career with producer Michael O’Connell, from her childhood ambition of being a reporter to her time as Miss DC and the importance of using the rights protected and provided by the First Amendment.

261 Being flexible and listening key to a good interview