Wade Keller is one of the lucky ones.

When he was 16, he started a do-it-yourself newsletter about professional wrestling. He’d fallen in love with the sports-entertainment drama as a kid and wanted to find a way to share his interest with others. Noticing an ad in the fan club section of a professionally written magazine, he decided to write his own and send a few copies off to friends. 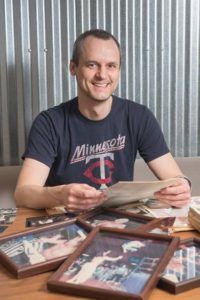 Wade Keller is the host of The Wade Keller Wrestling Podcast on PodcastOne.

That was in 1987. The DIY newsletter, which he folded, stapled and stamped by hand, later became a radio show, then a 900 number, then a website. Now he’s the host of the Wade Keller Pro Wrestling Podcast, a show on the PodcastOne network dedicated to the ins and outs of professional wrestling.

Along the way, there have been challenges, to be sure.

“The brand that I have built and the team of people who write for me … the thing I insist on, and I’ve let people go over this, you can’t be softening your opinions or holding back facts in order to gain access or keep friendships,” Keller said. The podcast, and the newsletter and website before, are based on giving readers and listeners “access to insider information” to a sports world that has been treading a line between entertainment and variety programming and is historically secretive, given the nature of professional wrestling.

“Those were deals I’d never make,” he said. Sometimes he’d cover controversial issues or tactics that would lead to strong words from people he’d considered friends. Sometimes the friendship would survive the storm; other times it was the end of the road.

“Other people went on rampages against me, the threatening phone calls, bad mouthing me,” he said. “If I don’t have a reputation that I’m serving my readers or listeners first over the interest of trying to be chummy with people in the business, I don’t think people would trust me anymore and I don’t think they’ll want to read what I write or hear what I say at that point. It would feel compromised. I’ve been real protective of that.”

That extends to readers and listeners, too, who get annoyed when Keller isn’t fawningly positive about the sport.

“Sometimes I’m real harsh on decisions made creatively or business-wise in wrestling,” he said. “Some people don’t like it because they think I’m hurting the business by being critical. My stance is you’re hurting business by placating incompetence or bad decisions or laziness.”