David Fahrenthold is best known for his notebook.

It might be a traditional, dependable tool for the vast majority of journalists, but it was his notebook detailing the calls he made trying to track down alleged donations made by Donald Trump before he won the presidency that earned Fahrenthold some notoriety. It’s work that won him the Pulitzer Prize for National Reporting.

Fahrenthold didn’t set out to chronicle Trump’s donations, of course. He started covering the 2016 campaign in 2015, spending time with candidates most people might’ve forgotten were ever in the race. 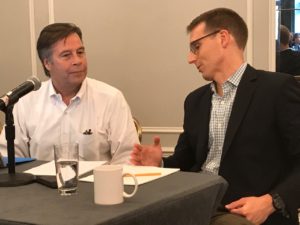 Washington Post reporter David Fahrenthold, right, talks to Politico media critic Jack Shafer before the start of their panel at the Association of Alternative Newsmedia’s annual conference in Washington, D.C.

The Washington Post then sent Fahrenthold to Iowa to cover Trump on the eve of that state’s caucuses. Shortly after taking the stage, Trump stopped himself, brought out “a big check, like a golf tournament-sized check,” written from the Donald J. Trump Foundation to a local veterans’ charity.

Trump then called the charity to tell them of his donation and went on with the speech. But Fahrenthold thought something was off with the whole show.

“That caught my attention because I thought it might be illegal. And it is. You can’t use your charity to help your presidential campaign or any sort of campaign,” he said, during a recent panel as part of the Association of Alternative Newsmedia’s annual conference in Washington, D.C.

Like so many reporters do, Fahrenthold thought he’d ask a few people a few questions and try to get to the bottom of everything: Where did the money come from and where did it go? The first part was relatively easy:

“It turned out he raised the money a couple days before that. You might remember he had the feud with Fox News and he skipped the Fox News-sponsored debate, held this big fundraiser for veterans where he said he raised $6 million, including $1 million out of his own pocket,” Fahrenthold said. But it wasn’t until a few months later, in May 2016, that Trump aid Corey Lewandowski called him to assert the money had been donated, but he couldn’t divulge where to or when or how it had been dispersed.

For the majority of the remainder of the presidential campaign, Fahrenthold chronicled his work researching all of Trump’s charitable donations, not just the $6 million raised at that one fundraiser. It all came back to the question: “If Trump would do this to veterans, promise money to veterans in the middle of a presidential campaign with the brightest spotlight he had and then tried to weasel out of that commitment, what was he doing before?”

David Fahrenthold is Washington Post reporter who spent most of the 2016 presidential campaign tracking down the reported donations made by then-candidate Donald Trump. He recently detailed his learnings from that work at a panel of the Association of Alternative Newsmedia during its annual conference. The notebook in which he chronicled the investigation is now on display at the Newseum in Washington, D.C.

264 – Press Freedom and the Trump administration