There are so many ideas in the world, so many things to think about in a short time span, that it’s almost easier to spout opinions than to give careful and considerate, patient thought to any one topic.

Christine Emba, writer of the “In Theory” column for the Washington Post, gets to spend a lot of time thinking.

But she tries to think in a diplomatic way, considering all sides, researching various opinions, details, points of view and frames of reference before she sits down and writes. 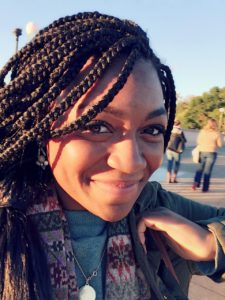 Christine Emma is the editor of In Theory at The Washington Post.

“I really am interested in bringing in to discuss ideas that I think are happening, are being discussed outside of the mainstream or below the surface, but that I think actually have an effect and are having an effect on public discourse and how we act in society and how we live in the world,” she said. “It’s less talking about what did Paul Ryan do today but how does this theory influence the way we’re thinking about this policy Paul Ryan is championing.”

Emba will pull from a variety of sources, including “religious quarterlies, a Marxist quarterly” and other, less likely publications, to try and consider where ideas are coming from, sometimes finding little connections along the way. The urgent march of time, however, takes this luxury away from some of her readers.

“We used to organize society around religion and belief in a free market. You’re increasingly seeing all those questioned,” she said. “What does that mean? Where are we going with all that?”

Emba points to two recent incidents as key examples: The memo released by a Google employee suggesting women aren’t equally suited or capable for high-tech jobs and the violent alt-right/neo-Nazi demonstrations in Charlottesville, Virginia, and the aftermath thereof.

There have been times when she’s “dipped a toe” into reading white nationalist websites and writings, purely for the sake of research.

“I want to know how they think and what they’re thinking about. The motivations are there if you want to read them,” she said. “That’s helpful to understand what’s going on, but that’s not the same as saying (those positions and actions) are justified. Things can be wrong and we should be able to say that. Knowing what the wrong things are that are percolating in different parts of our environment is important for combating them.”

Washington Post columnist Christine Emba joins producer Michael O’Connell to discuss the heightened importance of thinking and weighing multiple viewpoints before forming an opinion and the importance of calling out things that are wrong in an age of violent protests.

#268 – Put big thoughts into your writing