As a nation, we’re talking more about hate crimes and the ideas of white supremacy more today than in the past 30 years. But is there evidence to support the suspicions that hate crimes are happening more frequently?

That’s a question ProPublica has set out to try and answer. Unsurprisingly, it’s a murky field of investigation. 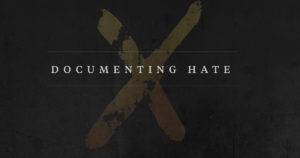 Pro Publica is working with more than 100 newsrooms to document incidents of hate crimes occurring in the U.S.

The FBI estimates there are roughly 6,000 hate crimes a year, based on reports filed with the federal agency. But ask the Bureau of Justice Statistics and the number is much higher – closer to a quarter of a million, said Rachel Glickhouse of ProPublica’s Documenting Hate project.

The initiative builds on work done by the organization last year leading up to the presidential election. “In the weeks after the election, there was a lot of chatter and some initial evidence that there was a spike in hate incidents happening,” Glickhouse said. At the time, a team of journalists “decided to look into how we can know if hate crimes are going up … let’s look at the data. They found that the data is flawed.”

The result is a far-reaching effort to work with newsrooms in a collaborative environment, collecting reports on hate crimes reported to civil rights groups and the public, and then cross-referencing that information with incidents covered by newsrooms large and small.

The Southern Poverty Law Center is a key partner in the Documenting Hate initiative. SLPC gives ProPublica “data about incidents that have been reported to them. We’re working with a couple of others to try and get their data. They’re sending us information about the incidents people told about and we’re putting it into a centralized database,” Glickhouse said.

Other incidents going into the database are from a crowd-sourced project: “On our site, we have a form that anyone can fill out to report a hate incident, a hate crime, a bias incident,” she continued. “We’re keeping it open as to what the person experienced, but anything in the realm of hate.”

Even determining whether something qualifies as a hate crime — perpetrated against a person based on their race, ethnicity, national origin, religion, gender, sexual orientation, disability or other protected status as noted by the FBI — is murky because laws vary from state to state.

More than 100 newsrooms are working with ProPublica on Documenting Hate, using their centralized database to find incidents in their coverage areas or to glean statistics on what could be national trends. Those same newsrooms also can feed information back into the database, providing updates on existing cases or adding new ones as they cover them.

It’s All Journalism producer Michael O’Connell talks to Rachel Glickhouse, who oversees ProPublica’s Documenting Hate project. The initiative aims to improve the data collection of hate crime incidents to determine whether hate crimes are on the rise, as many perceive. ProPublica is working with more than 100 newsrooms, civil rights organizations and members of the public to collect and verify the data.