Cenk Uygur has opinions on journalism and he’s not hesitant to share them.

Uygur started his professional career as a lawyer but hated it. He took a turn into public access TV and loved it, later trying talk radio. 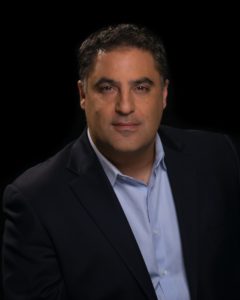 Cenk Uygur is the host of The Young Turks, a online show of perspective journalism.

In 2002, he started The Young Turks, the show for which he’s best known.

“At the time, it was just a radio show on Sirius, me and a guy who’s now the host of TCM,” Uygur said. “It was the first ever show on Sirius. We saw ourselves as talk show hosts, not journalists.”

He considers what they do on The Young Turks “perspective journalism,” a voice for a progressive audience that doesn’t want — or have time for – partisan filler and anchors who don’t care about the news they’re presenting.

That might have something to do with the show’s success on YouTube. There are no corporate executives to answer to, nor are there advertisers to appease.

Broadcast and network television “costs too much money. There are too many gatekeepers,” Uygur  said. “People don’t want gatekeepers. They don’t want you to cater to corporate advertisers first. Online video encourages, and it’s part of its DNA, to find people in the crowd and lift them up. Since we had no money and no infrastructure, we would’ve been lost (on broadcast TV). The crowd lifted us up. This is the voice apparently they were interested in.”

And those opinions about journalism — they were many.

“We don’t hide our opinion and I think mainstream journalism does,” Uygur said. “I don’t think TV has a liberal bias. That’s hilarious.” A touch of sarcasm here: “Giant multibillion-dollar corporations are so liberal. It’s just a right-wing talking point. TV perpetuates that talking point because the like pretending to be liberal.”

TV corporations have an “establishment bias,” Uygur continued. They embrace the status quo because it made them successful. “Why the hell would they want to rock the boat? It’s their boat! We’re honest about our perspective. We’re progressives. We’re outsiders. We don’t particularly like the establishment. That has given us an enormous advantage because the audience are also outsiders, they don’t like insiders.”

As for some anchors?

Cenk Uygur, host of The Young Turks, joins producer Michael O’Connell to discuss the hidden bias of most broadcast journalism — it’s not what some might expect — and how millennials helped build his media empire.