If newsrooms want readers to trust the validity and truthfulness of their work, show them the process. 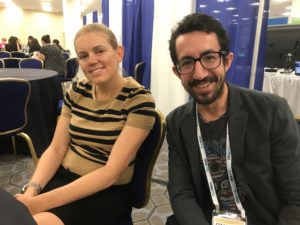 Mandy Jenkins is the head of news at Storyful, and Ben Decker is a research coordinator at Storyful.

For the past year, the team at Storyful, led by Mandy Jenkins and Ben Decker, have been working with newsrooms around the world to not only shine a light on “fake news” practices but also demonstrate how improved media literacy makes good reporting teams better.

Since the 2016 election, more newsrooms have shown an active interest in fact checking, says Decker, a research coordinator at Storyful. The question they’ve worked with is “how can we, as field researchers in the era of disinformation, provide added value, the context behind the journey that a single piece of content or a single story travels through various parts of the internet, not indexed by Google or on a new platform we’re not aware of. We’re looking at how different communities, for various different reasons, are using the internet.”

He says it is “integral” that reporters and newsrooms “re-understand and re-think about how the internet actually works.”

Media literacy and the ability to verify sources of information and their point of origin has become an issue of national security, Decker says. “There are actors outside the U.S. using digital media to fool the public on both sides of the spectrum.” Storyful’s work is apolitical, providing a “real opportunity to work on different issues with different people who have different beliefs.”

Decker and Jenkins point to falsified and manipulated documents that began to surface just before the French election, documents that appeared to link eventual president Emmanuel Macron with a scandal.

Storyful worked with a network of 36 newsrooms and tech partners to monitor coverage around the election. As a result, it was able to provide real-time context to the documents as they were being manipulated and the purported scandal received very little attention.

“The only people who reported on the leaks were the sites they were leaked to,” says Jenkins, head of news at Storyful. “Contrast that to what we saw here last fall.”

The lesson for newsrooms to learn here? Always ask the motivation for publishing a particular piece of information. “How are we playing into someone’s hands if we don’t know the origins of this story? There are so many leaks coming out that end up shaping narratives too – what’s the motivation there, what’s the back-back-back story? … What we can do as an industry is not participating in that and understanding that in every newsroom, how is this potentially shaping my community.”

Mandy Jenkins is the head of news and Ben Decker is a research coordinator at Storyful. They join producer Michael O’Connell to take a look at the importance of monitoring news as it happens to identify and possibly mitigate the spread of “fake news,” especially as it pertains to elections and political coverage.