When Shawna Thomas signed on to be the D.C. Bureau Chief for Vice News Tonight on HBO, the program she works for didn’t exist yet.

After a stint with the National Meat Association as a lobbyist for the meatpacking industry, Thomas got her master’s degree in broadcast journalism from the University of Southern California. She was selected to participate in “an early producing program at NBC News” during which the handful of participants spent three months each at four programs within the network’s news division. It was her work on the assignment desk on the network news desk that really helped her career and provided insight as to the kind of work she wanted to do. 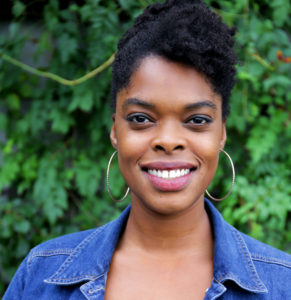 Shawna Thomas is the D.C. Bureau Chief for Vice News Tonight on HBO.

Along the way, she’s learned the real importance of flexibility in news, especially as more newsrooms understand the importance of a multi-faceted approach to telling a story.

“You need to be a holistic journalist,” she says. “There’s no such thing as a job you shouldn’t be able to do to some extent.”

There’s an immediacy to working in broadcast news, of working on a packaged story that also has a web story component and social media reach.

And then there was Charlottesville.

Vice News Tonight did a full 22-minute episode about the alt-right rally on the University of Virginia campus as the crime scene tape was still around the alleyway near the Downtown Mall where Heather Hayer was struck and killed during the rally in August. Reporter Elle Reeve had been covering the alt-right for years before coming to Vice News, Thomas says, and was able to embed with one group setting up in Charlottesville the night before the protest simply because they asked.

The resulting video – taped over the course of the weekend in order to stay ahead of what became a landmark moment in the country’s struggle with white nationalism in 2017 – was seen by millions of people after Vice News Tonight made the episode available, for free, on every platform.

“We knew by the end of the day, as we were crafting that piece, it was something not a lot of people get to see,” Thomas says. “It’s something that made you think, that made you a little scared.”

Shawna Thomas, D.C. bureau chief, senior producer and occasional correspondent for Vice News Tonight on HBO, joins Michael O’Connell to discuss the importance of breaking down one news story into its elements to reach a digital audience where it lives.

#280 Vice News Tonight and its different take on political news