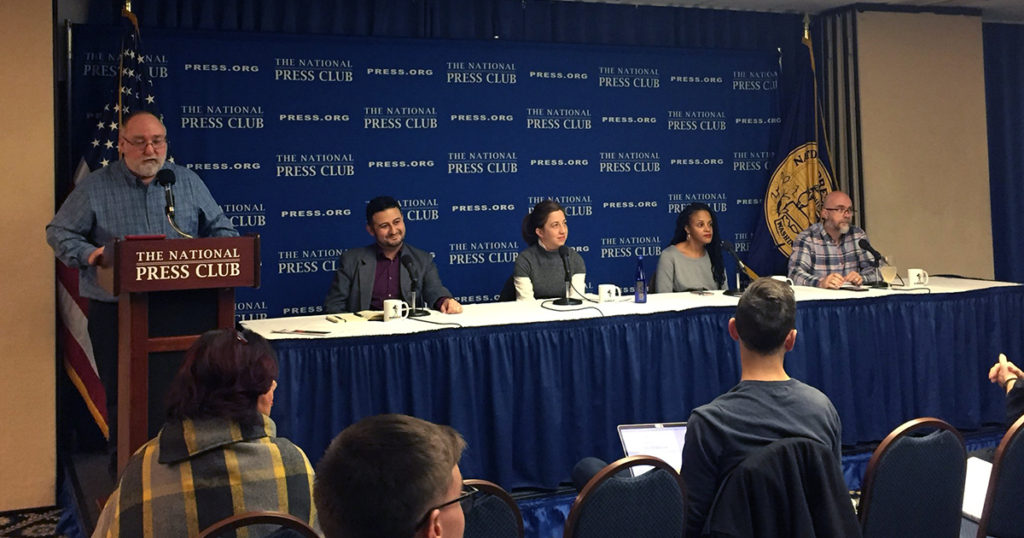 It’s All Journalism gets out of the studio and hosts a panel about the future of the alternative press with Alexa Mills of the Washington City Paper, Jason Zaragoza of the Association of Alternative Newsmedia, Andrew Beaujon of Washingtonian Magazine and Lisa Snowden-McCray of the Baltimore Beat.

It’s been a helluva year for the media world, what with “fake news,” “alternative facts,” closures, consolidations and an aggressively anti-press administration.

“Like the rest of the media industry, we’re in a period of transition,” said Jason Zaragoza, executive director of the Association of Alternative Newsmedia during a Dec. 11 panel discussion at the National Press Club, part of our first live podcast taping. In the past few months alone, outlets funded by venture capitalists like Buzzfeed and Vice News have seen staffing cuts, as have media giants like ESPN, while weekly publications like DCist closed without notice.

“We’re in a political climate right now where we need independent voices now more than ever, especially from the left. We have an administration that’s hostile to communities of color, to the LGBT community, to the working class they say they represent,” he said. “We need alts more than ever. Traditionally, we’ve been the voice speaking out for marginalized communities … there’s an opportunity here. There’s a strong demand for independent voices now.”

The Washington City Paper is one of those publications in limbo, currently up for sale with an uncertain future. But editor Alexa Mills is optimistic and hopes for an opportunity to recommit to being D.C.’s hometown paper, while the Washington Post excels at national coverage.

“Right now in D.C., we’re looking at a news shortage,” she said. There are too many stories and not enough people to cover all of them. Her staff’s work day starts by 8 a.m. and work tirelessly to fill each newsletter, but “we’re making hard choices about what we’re going to cover.”

There used to be a kind of competition between the Washington City Paper and DCist to see who got the bigger and better stories. “We lost that position and then, a year or so later, DCist totally folded. That capacity doesn’t exist when just 18 months ago you had people fighting to get better stories. I think, in a dream world, City Paper gets great new ownership and expands and really becomes D.C.’s hometown newspaper. … I picture a City Paper that expands into education, politics and sports.”

The role alternative media plays in the bigger world of news has changed too, added Andrew Beaujon of the Washingtonian and previously of the City Paper. While he doesn’t necessarily agree that the Post has moved away from local coverage — “they’ve got more people working on Metro now than when Jeff Bezos bought the paper” — things certainly are different from what they used to be.

“When you look at the alt papers of old, the first Washington alt papers, one had an illegal drugs columnist,” he said. Turning to Mills, he point out “you’ve got a legal drugs column! As things have changed, the role of the alt press has got to change with it. I’ve talked about this before but what we need to think about is the spirit of the alt press versus the product. The spirit and the product are different things.”

Some alt papers are just looking to survive in the unsteady now.

“Our goal is to keep making papers as long as we can,” said Lisa Snowden-McCray of the Baltimore Beat, a paper born out of the closure of the Baltimore City Paper.  The editor of the Washington Blade wanted to do something and try to save the city’s alternative publication. First, he wanted to buy it but the price was “untenable. They wouldn’t let him license the name either. So he decided to do a new things. The reason we’re able to put out papers, why I’m able to put out a paper and drive to D.C. is we’ve made partnerships.”

The Baltimore Beat doesn’t have office space yet, so they work out of offices of the Real News Network, a “super lefty video news” outlet. Some of their video journalists are now learning how to write for print and the difference in telling stories in that medium. “Our cover story this week is a look at how the Baltimore Police Department is covering the death of Detective Sean Suiter, or the way they’re not handling it and being really closed-mouthed about a lot of details. It’s not even our staffer writing it, it’s Baynard Woods with Real News,” creating a “grassroots alt media network that gets stuff done.”

It’s All Journalism gets out of the studio and hosts a panel about the future of the alternative press with Alexa Mills of the Washington City Paper, Jason Zaragoza of the Association of Alternative Newsmedia, Andrew Beaujon of Washingtonian Magazine and Lisa Snowden-McCray of the Baltimore Beat.