She’s traded a newsroom for a museum, but Erin Harper is still a journalist. 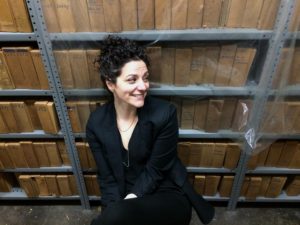 Harper, a multimedia producer at the U.S. Holocaust Memorial Museum, got her start at the Chicago Tribune, working on digital video and multimedia production and eventually working in collaboration with the web team on development. When offered a buyout, she decided to move to Washington, without a job, because “I had a network here and it’s a media town, I’ll land somewhere.”

Within a few months, a friend had recommended her for a job at, of all places, the U.S. Holocaust Memorial Museum.

“What does that mean,” she recalled asking.

Come to find out, it’s a lot like working in a newsroom.

Among her first tasks was taking the museum’s Instagram account and changing its focus. Instead of providing information on upcoming events and exhibits and encouraging visits and donations, Harper and the team went deep into the museum’s archives.

“We took (the Instagram account) into the storytelling realm,” she said. “We found photos in the archives that would tell a story of the holocaust. Now the platform is exclusively historical photos and their stories. With dedicated engagement, we’ve gone from 5,000 (followers) to 30,000 in two years. We’re connecting with our audience on a deeper level.”

In August 2016, she was involved in a project called Save Syria. Three Syrian-American doctors from Chicago visited the museum and told their stories of two weeks spent in underground hospitals in Aleppo during heavy bombings. “We recorded their stories and used the content from the Aleppo Media Center to tell the story of Syria through the lens of these doctors. We got into the museum and online in 15 days – that might not sound impressive, but in museum time, it had never been done before,” Harper said.

She very much still considers herself a journalist.

“I think part of that is the same skills are not just fully utilized but completely embraced by my colleagues and celebrated,” she said. “I’m getting to move quicker and getting more comfortable with acquiring rights (for media projects) and deadlines. They appreciate that we have innovated the museum” and how it tells the stories of those who can’t speak for themselves.

Erin Harper, a multimedia producer at the U.S. Holocaust Memorial Museum, joins producer Michael O’Connell to discuss how her journalism and newsroom skills are helping to tell important stories at one of D.C.’s most powerful institutions.

#261— Being flexible and listening key to a good interview

#287 – That time of year when reporters count backwards