Richard Davies, co-host of the How Do We Fix It? podcast, fell in love with radio and broadcasting at the ripe old age of nine.

“My dad bought a big Sony reel-to-reel tape recorder,” he recalled. “I started playing around with it. I have a recording of myself doing newscasts, making up stories about people doing various things.” 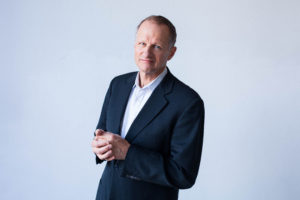 Journalist Richard Davies is the co-host of the How Do We Fix It? podcast.

Now, after a 30-year career in broadcast, Davies heads up a podcast production company, embracing the new frontier of audio recording.

His career in journalism started in newspapers, which kept him grounded and taught him the discipline that has served him well in his tenure, most of which was spent at ABC News.

Davies laments that journalism has become more of a business, with more care and attention to what drives ratings.

“Journalism has become less interested in issues in issues and more interested in clashes, controversy and celebrities,” he said. “You’re either thrilling people or shocking people or surprising people. I’m not saying all forms of broadcast journalism are like that, but I do think there’s a bias toward over-dramatization in journalism that is perhaps now more pronounced than ever with cable TV news being so prominent in the past 20 years.”

Davies values, more than anything, the power journalism has to stitch communities back together and sees podcasting as a logical continuation of radio’s magic.

Richard Davies, a self-proclaimed news junkie who started on the path to a career in journalism at the ripe old age of 9, joins producer Michael O’Connell to discuss his days as a broadcaster with ABC News, the stories that have stayed with him and why he’s enjoying the “Wild Wild West” feel of podcasts with the How Do We Fix It? podcast.

#243 – Solo video journalist emerges as model for most newsrooms

#297 – Learning, relearning and unlearning the magic of broadcast