“Thinking back on it, I think I’ve only ever made a paycheck in radio.”

Phoebe Judge loves the challenges and the simplicity of working in audio, taping interviews with people using only the sound of their voices to tell stories.

She’s also quick to dispel any assumptions that working in a purely non-visual medium is easier than one in which stories rely on what the audience can see as much as what they hear. 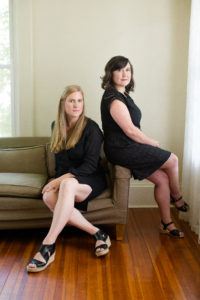 Phoebe Judge and Lauren Spohrer are the co-creators of the Criminal and This is Love podcasts. (Justin Cook)

“A well put-together audio piece is so hard to do,” said Judge, host of two podcasts, “Criminal” and the newly kicked off “This is Love,” who got her start at a small station in Cape Cod covering a murder trial in Nantucket before spending 2 1/2 years in Gulfport, Mississippi.

With audio, because only one sense is utilized at a time when taking in a story, the listener’s ears pick up more of the little details that would be overshadowed by something else in a visual setting. Listeners “pick up on nuance in voice, you can hear a bad edit, you can hear when the music’s too loud. It forces audio producers to try and do a perfect job in creating a sound that won’t trip viewers up. … I love that challenge. The sound of people’s voices, I like so much.”

Her father also worked in radio and Judge’s childhood in Chicago introduced her to some legends of the airwaves.

“I like asking people questions,” she said. “I ask people too many questions. I like to ask the most mundane stuff. I’d much rather ask what is it like when you get up and go to work every day, what’s the drive like, what’s the hardest part of your job? The intricacies of life and work are the types of questions I like to ask.”

Judge said her favorite moment in her new podcast came when she asked a man to describe his wife who had died many years ago.

“You can hear him start to speak and then he stops. He can’t do it,” she said. “I think it’s the idea of having to remember what she looked like and describe her is too hard. It was something about that question. There’s an incredible pause, you can hear him try and he has to stop. It’s two seconds. It’s my favorite thing and it makes me want to keep telling stories and keep working in audio because we can leave that pause and it says so much more than me talking or me summing things up.”

Phoebe Judge, host of the Criminal and This Is Love podcasts, joins producer Michael O’Connell to talk about her love of the audio format, the luxury of keeping silence in recordings and her delight in asking the mundane questions about life and work.