No surprise for podcast and radio fans: Relying only on people’s voices, maybe accompanied by music, is an incredibly intimate and personal way to tell stories.

“It’s great for characters. You feel like you get to know people,” said Joe Richman, founder, executive producer and host of the show Radio Diaries, which he created in 1996. “That sense of intimacy that exists when you put the headphones on and someone is speaking to you in your ear, that doesn’t exist in any other medium. We try to use that sense of place, that experiential quality of audio that is the magic of the medium.” 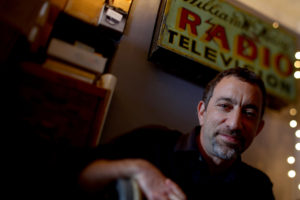 Joe Richman is the founder, executive producer and host of Radio Diaries.

Radio Diaries started with a focus on teenagers in its early days, giving tape recorders to regular, non-famous, seemingly ordinary people and asking them to share stories from their lives. Entries have been made for NPR, the BBC, This American Life and now the podcast.

There’s no trick for finding a compelling storyteller, nor is there one single mold that always works. The key to a good episode is a good story, pure and simple.

“Our philosophy is, let’s take important issues, whether it’s undocumented immigrants or teen moms or a kid with a disease or normal teenage life, and tell it through the story of one person. So often that’s what we seek to do with journalism: humanize big issues,” Richman said. “It’s the Trojan Horse theory – you get the story in, you get people to kind of understand this one person’s life, get who they are, where they’re coming from, and through that, you get to know the issue that maybe, without that kind of storytelling approach, we might think much differently or dispassionately about.”

Not all the stories are easy to tell or share, of course.

In one episode, Radio Diaries revisited the story of “Strange Fruit,” a song Billie Holiday wrote in the 1930s. Her song was inspired by a poem written by Abel Meeropol, a white teacher in New York City, after he saw the infamous photograph of two African American boys who’d been lynched for allegedly beating a white boy. But there was a third boy who was supposed to be lynched that day as well, James Cameron III. He was tied up and raised into the tree’s branches but taken down.

“No one knows why,” Richman says. “He’s considered to be the only person ever to survive a lynching in America. We had an interview with him.”

Additionally, cassettes of interviews taped in the 1970s featuring witnesses of the Marion, Indiana, lynching had surfaced. “Those tapes had been forgotten in a shoe box for decades,” he said. “We were able to use those recordings as well to add texture to the retelling.”

Joe Richman, founder, executive producer and host of Radio Diaries, joins producer Michael O’Connell to explore the intimacy of radio as a storytelling medium, the use of supplemental audio to enrich a story and how good storytellers come in all shapes, sizes and speaking patterns.

#308 — How to create interactive, immersive experiences in journalism