Depending on who’s talking, the homicide rate in the U.S. is either skyrocketing in some cities or has been brought under control. Obviously both can’t be true – or can they?

As part of a larger project looking at homicide rates in 50 cities across the country, and the rate at which those cases are closed, Washington Post database editors Steven Rich and Ted Mellnik set out to collect information on murders to see what patterns they could find. 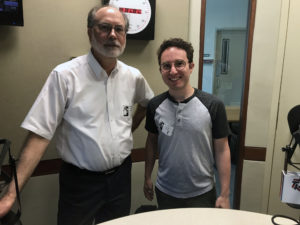 Ted Mellnik and Steven Rich are database editor at The Washington Post.

Mellnik now has 50 different paper maps of municipalities on the walls near his desk. Some are “speckled,” while others have clear areas indicating a high rate of homicide and low rates of closure, or cities where most cases are solved or closed in some way.

“Government records have a lot to do with journalism,” Mellnik said. “It used to be, the business was going through filing cabinets and looking for reports and forms, but now all that’s kept on computers and databases. If you’re going to do reporting these days, in some kind of depth, a lot of times instead of asking for paper records, we’re asking for data files.”

That also means it’s crucial to be able to analyze those files and find the real nuggets of truth that indicate patterns and outliers. But requesting data from 50 different departments often meant getting data sets that could not be easily compared: they first had to develop a system in which information could be uniformly categorized and analyzed.

With this particular project into homicide events and closure rates, they wanted to take a deeper look not just into the cities they were studying, but where within those cities rates were going up and down and whether cases were being closed.

With a clearance rate of 20 percent, meaning killers are seldom brought to justice in Chicago. In other cities, like Richmond, Virginia, the closure rate is much higher.

They also looked at the racial disparity among both homicides and case closures, finding irregularities in some cities where certain parts have high closure rates while others, not too far away, have lower rates. “It’s the same city, the same police force, the same budget, the same detective,” Mellnik said.

They’re hoping people who take the time to review the maps will be able to fill in the gaps, identifying whether there’s a certain point in a neighborhood with a high homicide rate and low closure rate where “people with weapons tend to gather,” information that might not come from the data provided by police departments, Mellnik said.

Washington Post database editor Steven Rich and Ted Mellnik join producer Michael O’Connell to discuss their massive undertaking: requesting and analyzing homicide and case closure rates from 50 cities across the United States. They talk about the disparities that exist in a single city and how data reporting no longer requires looking through filing cabinets but, instead, requires the ability to read and interpret data files.

Creating a Podcast: How to Edit Audio in Audacity