Chicago is a story filled with stories. But who’s telling them?

Andrea Hart is the co-founder along with Darryl Holliday, Bettina Chang and Harry Backlund, and director of community engagement at City Bureau, a non-profit local news organization based in Chicago’s South Side aimed at telling the city’s stories by people who live, work and study there. 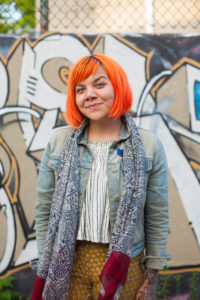 “A lot of people are hungry for quality information but also really care about where they live and want to identify ways in which they can participate” in what’s going on in their city, their community and their neighborhood, she said. National politics can be difficult to figure out and it might seem pointless or overwhelming to try and make a difference on such a large level, but local news and information can help people feel good about engaging in the immediate world in which they live.

City Bureau, in the 3 years it’s been around, has tried to establish efforts not only to share local stories, but to engage people who live in the South and West Sides of Chicago, both as writers and as participants in making sure the stories that matter to communities are told.

City Bureau got its start when a group of media people, including Hart, started discussing the limitations of their respective jobs and the challenges of local news coverage. “Local news doesn’t get taken seriously enough. People don’t really have the on-ramps to journalism in the way you would think,” and in some locations across the city, quality coverage didn’t exist.

Now there’s a paid fellowship program lasting 10 weeks that happens three times a year, helping journalism students get real-world practice while working with professionals on projects that get published and shared. There are free training programs as part of the Documenters program, open to anyone with an interest in learning how to document public meetings or better keep tabs on the important issues in their neighborhood, sometimes providing that information to the fellows and City Bureau organizers to help bolster local coverage.

And City Bureau hosts a public newsroom every Thursday for two hours in the coffee shop attached to their offices, opening the doors to “identify issues of journalism and assets in the community. We’ve had a range of journalists presenting the work they’re trying to do. We had a woman who organizes block clubs on the South Side. She did a whole session on what does it look like, how do we organize them, what’s the potential there to try and leverage this local agency,” Hart said.

Now some of the block club’s members are receiving documentarian training to attend meetings and help provide information, she said. “We try to figure out what they need and what we can provide, how we can work together.”

Producer Michael O’Connell talks with Andrea Hart, co-founder and director of community engagement at City Bureau, about the importance of local coverage and an inventive way to bring better representation and authenticity to not only the stories being told but empowering the people telling them.

#315 — Journalism for, of and by local audiences