In the greater scheme of things, getting the average person on the street to care about open government laws and the ability of journalists to have access to public records is daunting. It won’t put a roof over a person’s head or provide dinner for her family.

“Is it a hard case to make? Yes. But it’s a uniquely opportune time to make the case because the public is realizing the benefits of a transparent and open government,” said Frank LoMonte, a professor and the director of the Brechner Center for Freedom of Information at the University of Florida College of Journalism and Communications. 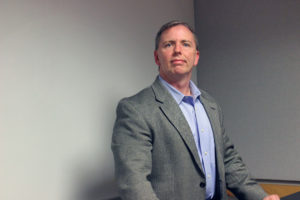 There are some very specific examples of things the general public does care about, and in fact knows about, due to public documents being provided to journalists. He points, specifically, to the ongoing water crisis in Flint, Michigan, and high-profile deaths involving police officers.

“When we see people dying at the hands of police, obviously the first concern is to stop that from happening,” LoMonte said. “Why is it that we know there are Chicago police officers that covered up and lied about the shooting of Laquan McDonald, who put forth a false narrative about him threatening them with a knife? Because a journalist spent 11 months in court fighting to get ahold of the video the police persistently dug in and tried to withhold.”

The Brechner Center is a think tank and policy research organization identifies and tries to work in a collaborative manner with a broad group of interested parties to identify and address persistent legal issues facing journalists who don’t have the legal support of the New York Times or Washington Post.

“The first thing we published was about access to information from police agencies in the event of officer-involved shootings. That seemed a very timely and urgent project, and it was actually brought to us from the sheriff’s office in Seattle, Washington. They were concerned, frankly, that they had not always done the best job in keeping the public informed and giving out the most accurate information in the event that an officer was involved in a high-profile shooting and they wanted to do better,” he said.

Once a litigator, LoMonte says the Brechner Center doesn’t file lawsuits directly but will file briefs in support of a case where it makes sense to do so.

“In my years of doing this work, I’ve become increasingly convinced you can’t sue your way to success,” he said. “I’ve worked on the opposing side with government agencies that will lose a lawsuit and will turn right around the next day and go back to the old ways as if nothing happened because it’s not their money.”

Lawsuits are great and can propel an issue forward, but “it’s going to be by bringing together stakeholders that will make change” that the most substantial progress will be made. “What I’m talking about is broadening the coalition for openness in government. Not just journalists, they’ve always been bearing the load and carrying the weight of advocating for open government, but people like Black Lives Matter, people like environmentalists, who benefit from access to information, making open government their fight too.”

Frank LoMonte, director of the Brechner Center for Freedom of Information at the University of Florida, joins producer Michael O’Connell to take a look at the role public records play in advancing public policy and why this is an “opportune” moment for the general population to support journalists’ fight for transparency.