Every morning, around 9 a.m., there’s a conference call in the ABC newsroom. It only lasts about 20 minutes, but for Brad Mielke, it’s one of the most exciting and informative parts of the day.

“I always felt way smarter after this 20 minute call then after 20 minutes of hearing headline news,” said Mielke, host of ABC News’ Start Here podcast, which launched in March. “I was getting the headlines but also the observations from people who knew stuff, who knew more than anyone else about these topics.” 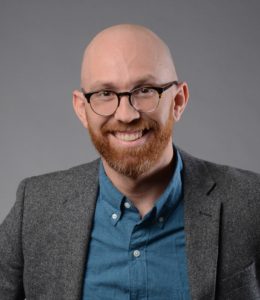 A career-long radio broadcaster, Mielke found podcasting to be a very rewarding outlet that he dabbled in in his spare time, starting a few years ago. “It was eye opening to see how much more work it managed to be than a piece of broadcast radio I could pump out in a day.” He and his now-wife would “spend a week painstakingly crafting this podcast I was super proud of,” but it was a much different experience than his daily job, where he’d go into a booth, provide some information and maybe some analysis on a given topic and then go on to the next thing.

When ABC News wanted to start its podcast, Mielke was their choice from the beginning. He first expected this to be in addition to his regular duties, but it quickly became clear the podcast was to be his full-time gig.

While both radio and podcasting are audio formats, and both are trying to capture the ear and attention of a listener who is flooded with innumerable options, podcasting feeds a different audience.

Start Here is designed for listeners who are “hungry for getting that extra scoop, that extra nugget that’s going to make you smarter than your friends when you walk into the office or at least keep up with the conversation. As a listener, that’s what I enjoy, so that’s the type of questions I try to ask.”

And with more than 70 years of tapes at his disposal, along with the resources of a major international news outlet within reach, Mielke and his team worked for several months to develop and produce their sound and format to provide those extra details and go beyond the headline to provide context and analysis while still providing the news of the day.

“From the beginning, we wanted you to walk away with the headlines but also to give the listener the experience of being in the newsroom with us,” he said.

Brad Mielke, host of ABC News’ new podcast, Start Here, joins producer Michael O’Connell to discuss the months-long process of developing a program that utilizes the best resources of a trusted and well-established news organization to keep listeners informed with headlines and analysis in a slightly different way.

#321 – Can a process birthed in Kentucky work in Philly?