The only way to enjoy a successful, insightful project is to pick it up and move it to another city.

Andrea Wenzel, an assistant professor at Temple University and a fellow at the Tow Center for Digital Journalism, along with her collaborator Sam Ford, just won the research prize for professional relevance from the Association of Education in Journalism and Mass Communication for a follow-up paper they wrote about their work in Kentucky. There, they worked with the Ohio County Monitor to establish practices and habits that better engaged residents with their hyper local media outlets, finding ways to not only improve the information available to readers and listeners but to help media outlets better understand their audience. 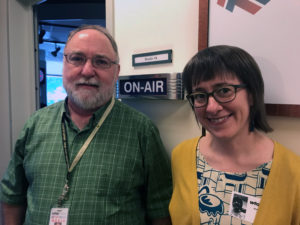 Thanks to her position at Temple, Wenzel is setting her sights on Philadelphia and looking to incorporate a similar study in two communities there using an adaptive model of what was done in Kentucky.

The exact same methods and tactics can’t be picked up and transferred over, but “what does it look like if we take the process as portable and implement the process in Philly?” she asked.

Along with colleagues Anthony Nadler, Melissa Valle, Marc Lamont Hill and Letrell Crittenden, she has been  looking at and working within two distinguished and dissimilar areas within the city: Germantown, “a historically African American community … with a history of negative media coverage and questions of stigmatized representation in media,” and Collegeville, a community in Montgomery County that’s mostly white and was nearly split down the middle in terms of voting in the 2016 presidential election. There, the question is about news deserts that result after the consolidation of local newspapers.

The questions driving her work this time: “What are local news needs and community information needs in these places? What ideas do residents have for strengthening their relationship with local media? What kinds of interventions can be used to make things better and to build trust?” she said.

There has been a research study and a workshop that spawned a few conversations with stakeholders to develop pilot programs that will begin in the fall. Wenzel has learned about different community organizations and active citizens who might not do what’s considered traditional journalism but who share information through a neighborhood Facebook page, a flier or newsletter of some kind, but they’re “not all synched up to each other.” Is there a way to get that information not only to residents but out to media outlets and help improve their coverage? Is it possible to then have reporters loop back with the community after a story is published and figure out what was correct, what was not quite on the mark and how that story can be the start of a relationship?

“Hopefully we’re going to tackle these things,” she said.

Andrea Wenzel, an assistant professor at Temple University and a fellow at the Tow Center for Digital Journalism, joins producer Michael O’Connell to provide an update on her award-winning work on researching community journalism needs in Kentucky and how her team is expanding its efforts in two areas of Philadelphia.

#273 – Political polarization and the massacre that wasn’t

#321 – Can a process birthed in Kentucky work in Philly?