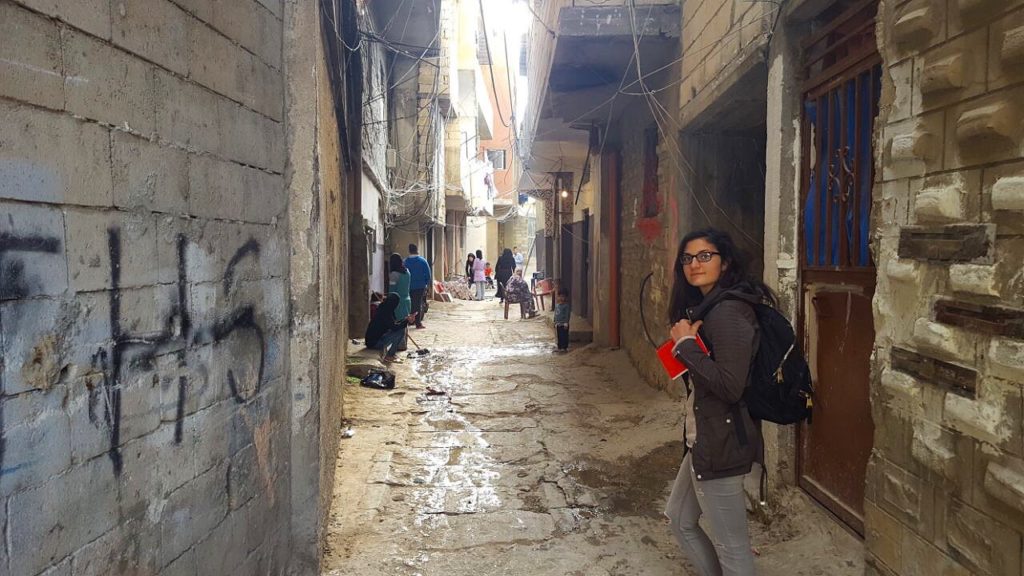 L. Marie pursues a story about suicides among young Syrian refugees in Lebanon.

L. Marie was determined to be an investigative reporter, even if that meant leaving behind a comfortable life and job to move to the other side of the world to make it happen. It would take more than eight months in Lebanon and nearly a year of calls and pitching before the Times of Israel picked up her story on young Syrian brides and the staggering rate of suicide among them.

In 2017, Marie, a freelance journalist and producer from Buffalo, moved to a home her family owns in Lebanon, determined to find incredible stories the world would be eager to read.

“It was the most stressful experience of my life,” Marie says now. “What I thought in my head was, I would go to Lebanon and I’d see all these things happening, all these injustices, things that would never fly in America. Of course an editor and a news outlet is going to want to run these stories.”

Her first day there, in April 2017, she went to purchase a SIM card for her phone. The clerk in the story was a 10-year-old Syrian boy. Inspiration struck and she went home, wrote up a pitch about child labor issues among Syrian refugees in Lebanon and emailed several outlets. No one was interested.

“That was the moment it hit me: this is going to be a lot harder than I thought,” said Marie, who wouldn’t sell her first story until a few months later, a piece published by Vox on these young Syrian boys who were working to support their families instead of going to school and the emotional and psychological trauma they’d experienced but couldn’t deal with.

“The parents are in survival mode,” she said. “If the boys can work, they’re taken out of school and put into work.”

But as she researched that story, another question came to mind: If so many young boys were working, what happened to the girls?

Many girls, in their early to mid-teens, are married off as a way to help out the parents by providing them with a dowry they can spend to care for their other children. in addition, it’s a step up into a better life for their daughter, who can be taken care of by an older man with more financial stability.

But my point is this is not the life they chose. Each girl carries some type of trauma with her.

“It could be that the girl is married and everything’s OK, maybe she’s not beaten, maybe she’s not forced to have sex all the time,” Marie said. “But my point is this is not the life they chose. Each girl carries some type of trauma with her.”

That became particularly evident during her second trip to a Syrian refugee camp several hours away from her home. She met a young girl willing to share her story.

An older man, in his early 50s, saw this girl and decided he wanted her. He contacted her parents, offered a $5,000 dowry, and a few months later, while the girl was doing dishes in her family apartment, a minister-type man came in, asked if she would accept this man as her husband, and she went into her room to change her clothes and be married.

“She gave birth alone … and is now stuck raising this child by herself. This man refuses to give her any money, to talk to her or to look at her. Her life as she knows it is over.”

L. Marie, a freelance reporter/producer based in Buffalo, joined producer Michael O’Connell to recount her decision to move to Lebanon for eight months in search of an investigative story, the saga of Syrian child brides and the struggle to get their story published.