Robert Delaney, author of the upcoming novel The Wounded Muse, fell into his career as a journalist and writer.

He also fell into his specialty.

He can, in part, thank his kung fu instructor.

“When I was going to university, I wound up in the school of communications and thought, sure, journalism, that’s fine,” said Delaney, the U.S. bureau chief for the South China Morning Post. “I didn’t have an aptitude for math or science and figured what the hell.” 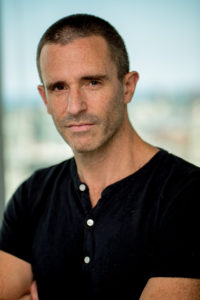 He was studying at Temple University and, at the same time, taking kung fu lessons. As part of an independent study project, he looked into the history and world of martial arts in America. He was also studying Mandarin.

“My adviser asked me to make sure I understood the foundation and philosophical underpinnings of kung fu, which took me to China,” he said. “I started learning about the country. At the time, I wasn’t expecting to go to China, but eventually the grand master at the studio asked if I was interested in going. That’s how I ended up in China.”

Delaney first landed in China in 1992, spending a year in a “third-tier city where there weren’t any English-language speakers other than missionaries.” Needless to say, it put quite a damper on his personal and social life.

Eventually, he landed a job with Dow Jones when the wire service was looking for an American or foreigner with journalism experience who could also speak Mandarin. Financial reporting was almost as foreign a concept as living full time in China. He was sent for a time to Singapore to learn how to cover rubber markets, learning the language of trade and commerce and futures.

“It wasn’t my natural comfortable place to be, writing about finance or futures,” Delaney said. “But what made it easy was no one else was covering futures for a western market. On the one hand, it was odd for me to be covering something I wasn’t inclined to look at closely, but because there was so much interest. We’re getting into the mid-‘90s. That’s when China’s economy started to take off. Whatever I was writing seemed to do OK.”

His lack of familiarity in the world of watching and learning trade and futures markets gave him a kind of advantage in a round-about way, and it also helped that he wasn’t a native Mandarin speaker, though he was getting better all the time. He’d ask a question of an expert, let them talk for several minutes, then ask his interview to summarize what they just said.

“After listening to so many explanations, my listening ability improved a lot,” he said.

Still, he didn’t really believe himself a journalist.

“I saw myself as more someone who was playing the part of a journalist. Because it was my first job, I figured this was what I needed to do,” Delaney said. “It took me a while to fall into the understanding that, yes, I was a journalist. Even though I was covering odd things, I gradually realized it was, in fact, the work of a journalist.”

Robert Delaney, the U.S. bureau chief for the South China Morning Post, tells producer Michael O’Connell about his unusual career path, from kung fu student to futures reporter covering the market in China. He also talks about writing his first novel, The Wounded Muse, which will be released in October.

#326 — Give women a voice and the world listens