A representative national survey found only 11 percent of Americans support what journalists perceive as their core mission and values, to objectively report on the news and the lives of people in communities across the U.S.

The Media Insight Project, in collaboration with the Associated Press’ NORC Center for Public Affairs Research, and the American Press Institute, conducted the survey of more than 2,000 people in two halves, conducted a year apart.

“We were setting out to try and understand how the public views what journalists see as their core mission,” says Jennifer Benz, vice president of the NORC. “What we really wanted to get at was understanding if some of the lack of trust in journalism has to do with how people view journalism values and whether the way journalists define their mission is leaving out certain types of people in the country, whether there are, therefore, ways we can change the way we tell stories, or frame stories, or pick the stories we tell in the first place, that would broaden the audience and help establish trust in segments of the population we’ve been missing.”

The debate about trusting the media and how people feel about journalism has been stagnant for some time, adds Tom Rosenstiel, API’s executive director. Journalists are accused, by liberals and conservatives, Democrats and Republicans alike, of biases — they’re pushing a liberal agenda and helping the Democrats or they are reflecting only the point of view of the establishment.

“We were struck by research that began a decade or so ago that has had a big impact on social psychology, that’s called moral foundational theory,” he says. Researchers “identified five moral instincts, core foundations of moral thinking that influence people,” including questions about how much a person believes in authority, loyalty, how much importance they put on care and fairness.

“The idea we had was, ‘Gee, there are these core journalism values all journalists know. What if we replicated moral theory work and asked people about journalism core values and see where they land in support or skepticism of those values?’” Rosenstiel says. “We wanted to see if we could open a new door into understanding trust.” 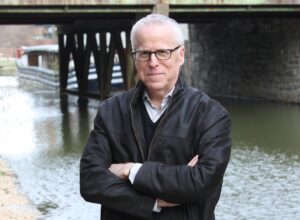 Respondents were first sent a validated questionnaire in fall 2019 designed to measure their personal moral foundation profile; a year later, the same people were sent two news stories to read, including a version that added some detail and information that might tap into those moral foundational values that aren’t always included in coverage.

The journalistic values identified by the organizations issuing the survey include believing people in authority should be watched and reported on; society works better if things are transparent and out in the open; society is benefited if journalists are social critics and act as searchlights; the more facts obtained the closer a story is to the truth; and it’s important to offer a voice to those not in positions of power.

“One of the sort of key findings that we saw in the data is that not all Americans universally embrace those core journalism values,” Benz says. “This idea that when a journalist says, ‘I’m just doing my job,’ part of the trust problem may be that many Americans are skeptical about what that job of journalism should be.”

Jennifer Benz, vice president of the Associated Press’ National Opinion Research Center’s Center for Public Affairs Research, and Tom Rosenstiel, executive director of the American Press Institute, discuss a new survey in partnership with their organizations and the Media Insight Project. Their survey of more than 2,000 people found only 11 percent of Americans support what journalists believe are the core values of their mission.

#351 Mistrust of the media isn’t new, but it’s getting worse