TikTok isn’t just about dances and lessons and poking a little fun at the world.

For domestic workers in the Persian Gulf region, TikTok has been a way to say in the open, to the whole world, that which has previously been shared only in secret.

Louise Donovan is an award-winning journalist who, like so many people, found herself unexpectedly at home and cut-off from her usual sources and stories last year during the pandemic. Now with the Fuller Project for International Reporting, a non-profit newsroom that often partners with news organizations around the world to shed light on stories affecting women, Donovan saw an opportunity to build on her previous work about domestic employees. 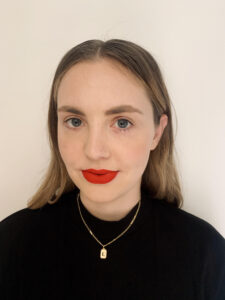 Louise Donovan is a reporter for The Fuller Project.

“Previously, domestic workers would use WhatsApp individually to talk with their family and friends back home,” she says. These women typically come from Asian and African nations and move to Saudi Arabia and Qatar for employment, but their working conditions are such that their bosses can steal and keep their passports and refuse them the ability to change jobs or visit their families without permission.

“Most foreign domestic workers in the gulf are sponsored through a system that gives their employers almost total control over them,” Donovan says. “They’re very vulnerable. These abuses have been documented a lot before. It’s nothing new that their sponsorship system is quite exploitative. What was different was that not a lot of women previously were taking to a very public platform to talk about it.”

Unlike Facebook or other social media platforms, TikTok is much more public — the option to talk privately just doesn’t exist in the same way. People from anywhere can see anyone’s video based on however the TikTok algorithm is working that day.

Donovan didn’t have a source tell her to look at the platform to find these women telling their stories; she just decided to look around and see what she could find.

“Some were using it like everyone else, to have fun and pass the time, but others were using it to document these abuses and these exploitative working conditions they face every day. I wanted people to know that there were women raising awareness of the issues they face, very bravely. They wanted to tell women at home, who might want to head to the Middle East, about the realities, but they were also telling women around the world” about their lives and the dangers they lived in.

Louise Donovan, an award-winning journalist with the Fuller Project, joins host Michael O’Connell to talk about her reporting on domestic workers using TikTok to raise awareness on their abusive conditions. She explains how these concerns were previously shared privately, on WhatsApp and other platforms, before the pandemic.