Before Zach Cohen started college, he asked an editor for some advice on what to study to be a better journalist.

“He recommended not majoring in journalism,” says Cohen, the National Journal correspondent now covering the U.S. Senate. “He said go get your background in something other than journalism, so you can report with authority on that topic.”

Taking that advice to heart, Cohen studied at American University’s School of International Service, minoring in journalism, getting his real education covering student government for the university paper.

The National Journal is akin to other Washington, DC-focused publications, like The Hill and Roll Call, in that its driving purpose is to explain how Washington works and who the major players are at any given time. 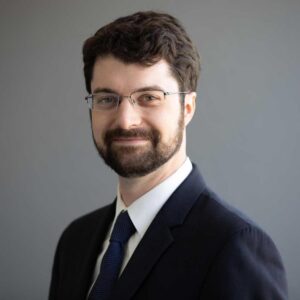 Zach Cohen is the Senate correspondent for the National Journal.

In the past few years, Cohen has developed a few particular interest, including judiciary proceedings — he covered both of former President Trump’s impeachment trials and the confirmation of Supreme Court Justice Amy Coney Barrett — but he also keeps an eye out for other interesting bills that are scheduled to come up for debate.

“A couple of months ago, there was a debate about whether the DEA should retain some of its enforcement capacity to crack down on fentanyl distribution,” Cohen says. “It became a bigger question about criminal justice reform. There was a danger that if the Democrats couldn’t come up with an agreement on how to classify fentanyl as a schedule one narcotic, or whether to at all, with at least certain types of fentanyl, or the DEA would lose its enforcement ability. I get to cover stories you don’t hear a lot about but they’re really important questions that they are debating.”

With so much going on in any given week that the Senate is in session, how does Cohen know what to prioritize, what to lightly address, and what might come out of left field as a surprise crisis?

“Each Sunday we write a look-ahead, here’s what the Senate is working on this week,” he says. “I can touch on a couple different issue areas coming up at the same time. Even if it’s not a full story, it’s telling our readers you should watch this. … I’ll talk to my editor every day, but especially on Monday, to track what’s happening, here’s what I’m thinking about writing, here’s what might pop up and derail my entire schedule. We try to be flexible so we can find what works for the moment.”

Cohen also relies on some grounding sources who can provide information to bring him up to speed on the topic at hand.

“Luckily, nothing surprises people a lot, they usually know an issue is coming up,” he  says. “If I have to write about the reconciliation process, I better bone up on Senate rules and procedures and I have a chance to do that. I have some sources I go to time and time again and ask them all my dumb questions so I don’t sound so dumb when I write about it.”

Zach Cohen is the Senate correspondent for the National Journal, also appearing on cable news stations on behalf of his publication. He talks with It’s All Journalism host Michael O’Connell about why he studied international service in college, how to set up a weekly schedule for coverage and why it’s important to have trusted sources who get used to your questions.

481. How to cover a music industry changed by COVID-19