In 1972, women were fighting for equal pay, equal rights, equal protection under the law and the right to govern their own lives.

In 2022, some of those battles are continuing, and Ms. Magazine is still there to tell the stories of the women working to make things better.

Katherine Spillar is the executive editor of Ms. Magazine and serves as the executive director of the Feminist Majority Foundation, which publishes the magazine. 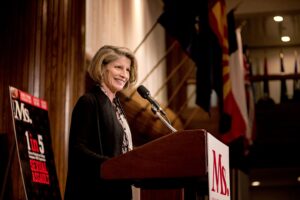 Kathy Spillar is the executive editor of Ms. Magazine.

“So much of what remains in the work towards full equality for women is political equality, equality in decision making and in power,” she says. “A lot of the work we do is focused on how women’s rights groups and feminists groups are working to gain equality in the political arena but also continuing the work on the social front, how do we change culture to catch up to where people want to be, where women want to be, and it’s been a real opportunity to have Ms. as a communications platform to cover the full range of issues that feminists are working on here and globally.”

Ms. continues to publish a print magazine, but the platform has grown considerably, in scope and in reach, to reflect feminist issues around the world. It has developed an educational arm in addition to providing reporting.

“We started a digital program in college classrooms and now have expanded in terms of reaching many in high school classrooms with a digital version of the magazine and have literally thousands of students every year who use Ms. as a teaching text in their courses on women’s studies or political science or multicultural studies,” Spillar says.

As the world and the media landscape has changed in the past 50 years, “it became very clear that you’ve got to be online to be reaching even more people. And as people want to get their news more on their cell phones and their laptops and their iPads, we began to dramatically expand the work that we were doing at MsMagazine.com. It’s not the same as the magazine, we don’t publish every article that is in the magazine on the website … but we also have expanded the articles that we’re able to produce. We’re up to over 1,500 to 2,000 articles a year on MsMagazine.com,” she says. “We search out the voices of those who are doing this work, who can talk in very informed ways…whether it’s for legal equality, or more women in political office or in appointed office or in the judicial branch. It’s about the challenges that women continue to face, that teenagers face. We now have articles that are written by teen journalists and it’s their first opportunity to publish in the magazine as well as online.”

Going into the next 50 years, Spillar says Ms. Magazine has an opportunity as much as an obligation to build on the knowledge gained by the feminist movement.

“This has played a key role in spreading ideas and information and connecting feminists to each other,” she says of the magazine and the digital reach. “You’ve got to collectively work towards moving forward. And that is a key aspect of what Ms. has been able to do. In the virtual world, internet and social media, even more can connect. It’s the power of ideas and information that Ms has played in this larger movement to keep feminists connected and informed.”

Ms. Magazine debuted in 1972, charting a new path in journalism that centered on feminist voices and concerns. Executive Editor Katherine Spillar discusses how Ms. is marking its 50th anniversary and what that will mean for the magazine’s next 50 years.