Radio and storytelling have been central to Joanne Griffith’s life, from her father’s stories about moving from Barbados to the UK in the 1960s to listening to his beloved cricket games on medium-wave radio from their home outside London.

“In the Caribbean and Barbados in particular, talk radio really was the way a lot of people were getting their information, whether from the BBC or local outlets,” she says.

When Griffith joined the BBC as an intern, she noticed there weren’t a lot of people who looked like her, or sounded like her; many of the stories read by broadcasters didn’t focus on her community either. 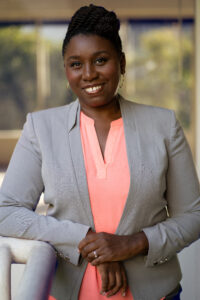 Her entire career has focused on making sure people are represented in the media. As the recently appointed chief content officer of American Public Media Group’s APM Studios and an advocate for sharing and including diverse voices and their stories, Griffith keeps trying to bring to the forefront the stories and experience of people of color.

As an intern at the BBC, Griffith says she “started to find ways to add stories because there weren’t any Black people in the newsroom. Those stories were not always welcome or the first to be picked but I just kept going. I found other reporters interested in exclusives or doing the stories. For me it was less about working in the industry but always more so about how do I get great representation for my community rather than being a voice on the air, which was not anything I ever aspired to.”

With APM Studios, she is again trying to find the best ways to broaden access and representation in the media, this time in podcasts and meeting the increasing interest in podcasts among minority communities.

There have been many discussions on “thinking about how we serve the audience in this digital age. How do we serve children?How do we think about lifestyle and culture? How do we do our spin on news?” she says. “I really love this medium of podcasting and what you can do with it. Also, in this space, there’s so much of it. Everywhere you turn, there’s a new podcast, someone has a new show, there’s a new this and that. That’s the beauty of this platform. But somewhere in all that, we’ve lost what it means for the audience.”

Griffith is looking at her work with APM Studios through that lens. “Public media, as much as I love it, hasn’t done the best job serving diverse audiences. In podcasting, we really have an opportunity to do that. … How do we bring all those people in who haven’t necessarily been served by public media? Not just subjects of interest to that audience but with hosts who look like them, hosts they can identify with. Growing up, that was the biggest issue I had. Yeah, radio is great, but there’s no one who sounds like me or looks like me. We want to create a space where people can see themselves, where they can recognize their life experiences and what they’re going through.”

Joanne Griffith is the chief content officer of the American Public Media Group’s APM Studios. The talks to It’s All Journalism host Michael O’Connell about her role overseeing APM Studios’ editorial vision and brand voice. They also discuss why it makes sense for newsrooms to make diversity part of everything they do.