Dan Rottenberg has seen the world, and journalism, change in his 70-year career.

“When I was in seventh grade, I heard Judith Crist, a reporter for the New York Herald Tribune, and she said the goal of a journalist is to find out the truth and put it down in print. That was sort of my mantra for years thereafter. Neither Judith Crist nor I ever imagined that there would become a time when print was obsolete,” says Rottenberg, whose byline can be found in Rolling Stone, Town & Country, The New York Times, Playboy and others. 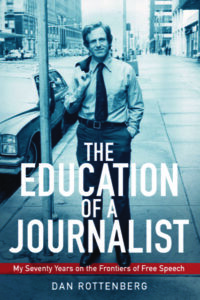 Dan Rottenberg wrote about his seven-decade career in “The Education of a Journalist: My Seventy Years on the Frontiers of Free Speech.”

He’s also just published a book, The Education of a Journalist: My Seventy Years on the Frontiers of Free Speech. “What inspired me to write The Education Of a Journalist was the feeling that students in college today are not looking for jobs in journalism. That’s what motivated me to tell them my story. From the time I was about 8 or 9, I was bound and determined to be a journalist. When I was in college, I assumed I would spend my entire career in daily newspapers. I spent six years in daily newspapers and then never again.”

Instead, he worked for magazines, alternative publications, weeklies and other sorts of publications that might not have been options when he began his career. “The point I would like to make, and I hope the book makes it, is that there’s always going to be a need for journalists. The world needs journalism. We especially need it now because, as you know, the idea of truth and finding out what’s really going on is under a lot of attack.”

Standing up for the truth and speaking out has gotten Rottenberg and his colleagues in some legal situations over the years, including the time the mayor of Philadelphia tried to sue his publication, The Welcomemat (later Philadelphia Weekly), for libel.

“I made it into what became a precursor of the internet,” he says. “People who have something to say and no place else to say it, here’s where they can say it. We were printing, it was like a giant op-ed page. Anybody could write, anybody could submit. I was the editor, I exercised some judgment, but we were publishing outrageous stuff. I don’t necessarily endorse this but let’s get it out there, let’s talk about it. Let’s hold it up to the light instead of saying shut up. We got sued for libel a few times, including the mayor, Frank Rizzo. If you stand up for what you believe, it strengthened our publication.”

He believes that while newspapers and print publications might be fading into the background, the opportunities for people to tell their stories and inform their communities has never been better or more accessible.

“The idea that if you don’t like your newspaper you can start your own, maybe not publish a fully fledged daily newspaper, but you can publish a weekly. With the internet nowadays, you can do almost anything,” he says.

Dan Rottenberg, author of The Education of a Journalist: My 70 Years on the Frontiers of Free Speech, tells It’s All Journalism host Michael O’Connell there’s always going to be a need for journalists, especially now when truth is under attack.

514. Soledad O’Brien and the ‘messy’ journey to good journalism