When Soledad O’Brien was in college taking organic chemistry with her sister, she realized becoming a doctor wasn’t her passion. An internship at WBZ-TV in Boston helped O’Brien find her path forward into news and working to tell the stories of interesting people who have something in their lives about which they’re passionate. 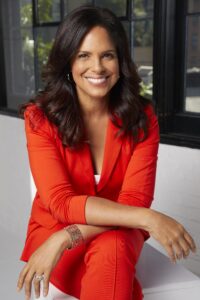 “Even as I was at the starting levels, I could see the jobs that were interesting and intriguing to me and what I wanted to do,” O’Brien says. “From the get-go, even when I was running scripts and getting coffee, I loved being part of the machine, where the big job was to go do the stories. I don’t think I would’ve figured that out had I not ditched my plan and gone and tried something else.”

From that first internship in 1987, O’Brien has become a household name, spending time on several networks including CNN and HBO with her reporting and mentorship. She’s driven to find the interesting stories, and the interesting people, and learning about them and their lives.

O’Brien is also wary of journalists who have forgotten why they went into this career to begin with and find themselves cozying up to people in power. Pointing, in particular, to the recent White House Correspondents Dinner, she says she’s frustrated by those in the industry who “lack humility” they might have had earlier in their careers.

“I think the dinner is a way to celebrate your proximity to power,” O’Brien says. “Especially in this time right now. It’s a crazy time in terms of government and democracy and the rules of law. We’re going to put on nice dresses and party together. It seems odd to me. … I wouldn’t put on a gown and go to a party with the people I’m supposed to be covering.”

But O’Brien remains inspired and encouraged by young journalists, those who have not yet been dazzled by the idea of celebrity from journalism.

“They’re so interesting and the work they’re doing, maybe because they’re young and they’re not necessarily connected, I find that they are very interested in finding the truth of a story,” O’Brien says. “They’re just aggressive and dedicated. I also think there are a lot of places for really good journalism. I love the Marshall Project. … I think in the mainstream press, or to be more accurate the political press, you have terrible lead people and they’re not good. When all of those anchors at CNN were crying in their soup over the departure of Jeff Zucker, it was so weird to have this heart-rending thing on camera. I think it’s messy.”

Soledad O’Brien discusses her career journey from an internship at WBZ-TV in Boston to becoming a correspondent at CNN and documentarian at HBO to launching the Everyday Wealth podcast and starting her own production company.

513. Reporting for seven decades on the free speech frontier

515. Do local newsrooms provide the best coverage of local schools?