Kira Brunner Don grew up hearing stories about the Soviet Union and international revolution from her “very far-left-leaning parents. They were kind of Marxists,” she laughs.

But their stories inspired her to travel and learn for herself about such places, starting with a trip to Eastern Europe in 1991, just as the world was starting to change rapidly away from the Communist era.

“I hadn’t thought about being a journalist, but I wanted to be there, I wanted to see what was happening. I spent the next 10 years going back and forth between New York City and Eastern Europe, Moscow mostly, the former Yugoslavia, the Czech Republic, anywhere I could find.” 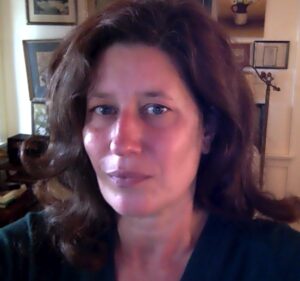 Kira Brunner Don is the editor in chief and co-founder of Stranger’s Guide.

Brunner Don remembers splitting her days between “blue-helmet UN peacekeepers” and the Bosnian refugees while staying in a hotel in Zagreb, listening to the refugees’ stories while they were waiting for bread and stew. That’s when she decided to be a journalist.

Now she’s a co-founder, with Abby Rapoport, and editor-in-chief of Stranger’s Guide, a travel publication written by people who live in the country, city or region highlighted by each issue.  “We wanted to play around with what it means to think about place. That does come from my own experience as a journalist and talking to people and the curiosity you have as a journalist when you cover another country.”

They were inspired in part by old travel guides written in the late 1890s, also titled Stranger’s Guide. “They were a real thing people wrote. Little booklets you could buy that would tell you what you would need, where a boarding house was, where the best brothel was, who the best madam was at the brothel, where there was a ferry. They were quirky because they were written by regular folks on the road traveling,” Brunner Don says. “We took that idea, the quirkiness and intimacy, and tried to blend that into a travel magazine that was written by people in the place they were.”

Each issue features a different place and there are some consistent topics, including music, food, sports; there’s typically some long-form pieces and maybe some investigative work and a few long-form photo essays. But Stranger’s Guide does not include “where to stay, where to eat, what to do. There’s a million apps for that. This is not at all what we provide,” Brunner Don says. “We tell you what’s going on politically in the country, what are the stakes. … Besides those more traditional ways of approaching travel, we usually cover refugees and LGBTQ issues in each issue of the magazine.”

For example, their Tehran issue discussed how “it’s illegal to be homosexual but not to get a gender-changing surgery because there’s a preference that people would pick one gender or the other,” she says.

The writers are different in each issue and are recommended to Brunner Don by friends and reliable sources in-country, people whose voices are credible and worth amplifying. “The idea is to look at a city as it is lived.”