The idea of a hybrid journalist might not be a new one, but it enjoyed a bit of a resurgence because of the pandemic. 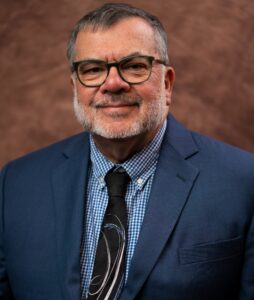 Richard Lee is an an associate professor at the Jandoli School of Communication at St. Bonaventure University.

The university has a small grant fund to support interdisciplinary projects and Lee, who earned his bachelor’s degree in English from the school in 1975 and went on to work as a reporter and government communications specialist in New Jersey before returning to St. Bonaventure in 2011, had an idea.

“I decided to see if we can take a look at creating some hybrid partnerships between members of the journalism faculty and some people in other disciplines, modeled after what has worked well with medical hybrid journalists,” he says.

The grant allowed funding for five projects and, when it was announced, he received five proposals for the first go-round. “We have a philosophy professor looking at the moral and ethical issues involving the covid vaccine, when we restrict people from certain locations. We have a history professor looking at culturel wars from a historical perspective. We have a Phys Ed teacher taking a look at Title IX and whether it’s been effective,” Lee says. “That’s a good example of how professors are working together. Her idea was, I’m going to write a story about whether Title IX was effective,’ and the journalism professor says ‘That’s great, first thing we have to do is define what is effective.’ That’s the dialogue taking place between journalism and non-journalism people.”

The journalism faculty are serving as editors on these projects, all of which have a student involved, either from the journalism program or the discipline of the other professor. The completed projects, essentially researched white papers, are published on the website for the Jandoli Institute, a public policy center Lee created when he returned to St. Bonaventure and which he runs.

“The key to me is to reach a wider audience,” he says. “Academics write a number of papers and get published in journals. They are not widely read. When I see colleagues outside the communication school, I see they have a lot of expertise, they have something to say, they have something to say that’s valuable and I’d like to get that out to a wider audience. … I like to put out scholarly research but I want to make it readable. Having an op-ed in a newspaper will reach more people, generally, than having an article in an academic journal.”

He’s also hoping to set an example, for universities, students and journalists alike, that there are more sources available to utilize than the small core they’re already contacting when needed. “There’s a lot of people out there doing good work. I think the more we can get a diverse group of experts out there to journalists. One of the benefits … for the journalism faculty, and they can bring this into the classroom, is this shows how you can use these experts to make your reporting stronger.”

Richard Lee tells It’s All Journalism host Michael O’Connell how the Jandoli School of Communication at St. Bonaventure University used hybrid journalism to bring academic expertise to the masses during the pandemic.

523. Will Be Wild podcast explores lead up to Jan. 6 insurrection