WASHINGTON – ABC News’ Rick Klein has many roles, his favorite being that of a political director. He swears by Twitter, providing an audience the news they want and staying out of the weeds. 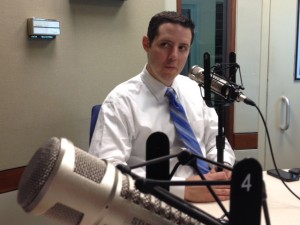 ABC News’ Rick Klein discusses the changing concept of a TV journalist, especially when it comes to political reporting. (Photo by Megan Cloherty)

Klein got his start in politics as a kid coloring electoral maps instead of iHop placemats. He always had his eye set on covering politics and thought that starting as a print journalist would be his ticket to Washington. After working at The Dallas Morning News and covering politics and the Bush campaign for The Boston Globe, Klein landed at ABC News as a reporter for its website in 2007.

He’s no longer behind the scenes. Klein is now the director of content out of Washington for World News Tonight with Diane Sawyer, often featured on NPR and Fox News, hosts a weekly webcast that rivals most cable news for ratings and maintains his editorial ground in daily political reporting.

For Klein, the details are not in the medium.

“The phrase I use is platform agnostic. I don’t care, literally don’t care, how you consume your news. I want to get it to you however that way is. If that is purely online or mobile, digital, if that is just through the television airwaves, or radio airwaves, if it’s just print, I want to find a way to get you there. If it’s just beaming something into your head, I want to be part of that technology,” Klein said.

He’s not really joking. The reason Klein says he’s so valuable to ABC, beyond his reporting and sourcing, is his ability to understand digital trends and operate within them. A lot of that has to do with creating a “digital persona,” as Klein calls it, that goes well beyond a reporter’s professional presence for their employer.

“I think the smartest journalists now, whether they’re 22, 42 or 62, are thinking along these lines and trying to figure out how they can craft a full persona who is not just the person you see in front of the building at 6:30 with a good standup, or not just the person who has the byline on the front page of The New York Times or The Washington Post. That there has to be a whole digital integration around everything you do. And that your personal brand as a reporter depends on reaching people in lots of different ways.”

Ask for the tool most essential to his success in the past few years, and Klein will point to Twitter. He admits it’s a resource so important that he questions how he did his job without it.

“It is the most efficient way I can have to make sure I’m seeing the stories I need to see. I can just pull up Tweetdeck and see the people I follow, I’m not going to miss anything. I’m going to see the news as it breaks, I’m going to see the important stories even in small local places. It’s all there for me,” Klein said.

Read a transcript of our interview with Rick Klein.