WASHINGTON – It’s a unique thing in journalism that you find a job on the cutting edge of transition, where your work — in it’s original form — is considered special and your job is not in jeopardy. Now, finding that job is a reality for many journalists in Web design, analytics, video and in multimedia roles. But finding that gig at a traditional news organization? Seems like too rosy a picture. It’s in this glossy pink world of opportunity that we find AJ Chavar. 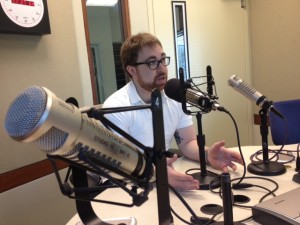 AJ Chavar finds inspiration for his videos at The Washington Post in social media and other video projects. (Photo by Megan Cloherty)

While I’m writing a little more visually than usual, I do not mean to be trite. Chavar is in an enviable position at The Washington Post as a video journalist. And he earns the secure foothold he has there. We’ll include some of his work later in this post.

I was curious, as a journalist with TV news background, why he got into doing video at a newspaper versus seeking out a visual-first employer, like a documentary house or TV news station. He told me, my thinking was backwards — that unlike broadcast news outlets, newspapers are willing to take more latitude with their video content.

“When it comes to sort of beautiful documentary stories, you don’t see a lot of that in mainstream broadcast. That’s what I wanted to do. And, newspapers, sort of know that they can’t compete with broadcast stations when it comes to the things that they’re really good at. So, at newspapers, you’re able to work on in-depth, local stories and enterprise stories and you’re able to do things that are a little more beautiful and a little more poetic on occasion than I’ve seen people allowed to do or have the opportunity to do in broadcast,” Chavar said.

Video journalists at the Post work on their own, with reporters and with the newsroom on larger in-depth stories. Chavar says unlike a TV news piece that is relatively hard to find online even a few days after it airs, videos on the Post‘s site stand alone.

“I think what makes a good newspaper video story is one that people are moved to share. And I was thinking of that, and I try and think of that when I do my videos now, what is a way that I can tell this story or edit this or what is just something I can put together that is visually appealing, but also goes a little deeper than that that people are just going to be motivated to want to share with people and do that,” Chavar said.

However, Chavar will not deny while he has more creative license, it’s harder to make his work a viewer’s habit.

“I really think that you need to sort of get your audience motivated to come back to your website, because it’s not like the TV, which is always there in your house and you can always flip it on and watch the news. People need to make the decision to go to your website,” he says.

The Post just opened up a number of positions in an effort to launch a politics outlet, hiring exclusively visual producers and editors to come to work at a newspaper building.

Not only does the newspaper produce videos like Chavar’s but it puts out 59 seconds, a daily anchored wrap of the headlines, interviews with local sports figures and policy makers and other “shows,” for lack of a better term, that have debuted in the last year.

During our podcast, Chavar talked about the importance of staying on top of social media, especially from a video perspective. For example, he uses Instagram to tease his upcoming videos. Chavar also offered tips on how to take ho-hum video skills up a notch. He suggests shooting multiple shots to create a sequence for each “moment” you want in a video. And plan ahead.

“Even if it’s just 10 minutes of me sitting and making a mental list and not writing anything down, because the more pre-planning you do, the less work that you have to do when you get to editing, which is the hard part,” he said.

We spoke about his most recent video on Washington personality Cedric Givens, who has been running backwards through the streets of downtown D.C. for decades. It was a colorful piece full of personality and action, and looked difficult to shoot.

“I interviewed him in his backyard for about a half hour, 40 minutes or so, and then followed him running for maybe, I’m going to lose track of time, but I want to say it was probably 90 minutes to get from his house to the White House. Maybe a little shorter,” he said.

Out from behind the lens, Chavar feels positively about where journalism as a whole is heading.

“I really believe that it’s amazing right now and I think that it’s hard for us as journalists to see that when know how tough it is on the inside and you see, I don’t work at a small paper right now, but I know, I have interned at small papers. I know a lot of people at small papers. They are afraid. They are worried about what’s going to happen to their job and this and that. And those are all legitimate fears and it’s really hard to divorce yourself from that when you’re thinking about the state of journalism. On the business side, it’s in really rough spot right now. But, the quality of journalism that’s being put out almost everywhere is miles above what it’s been,” he said.

Read a transcript of our interview with AJ Chavar.