Ben Wikler interviews political activists and organizers on his podcast and radio show The Flaming Sword of Justice, which is affiliated with the well-known political advocacy group MoveOn.org. He has previously worked for the well-known online activist communities, Change.org and Avaaz.org. 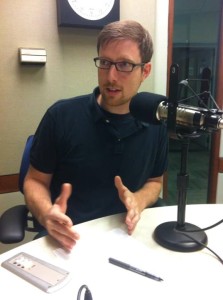 Ben Wikler, co-founder of The Flaming Sword of Justice (Photo by Michael O’Connell)

The host and interviewer got his first big break in media as a student when he helped comedian-turned-activist-turned-elected official Al Franken with the satirical book “Lies: And the Lying Liars Who Tell Them: A Fair and Balanced Look at the Right.” Wikler went on to work for Franken, now a U.S. senator from Minnesota, on the Franken’s talk show, which aired on the Air America radio network during President George W. Bush’s administration.

A native of Madison, Wis., Wikler said he was influenced by public radio and The Onion, two forms of media that have deep roots in his home town. He also experienced a heavy dose of political activism growing up.

“My first political memory is my mom taking me to a Jesse Jackson rally on Capitol Hill,” said Wikler, “Yeah. It was the 1988 presidential race and I was seven. Very exciting.”

The activist was always interested in journalism, particularly media with a point of view. While still in middle and high school, he started underground newspapers, including one that was banned by his school administration.

As a teenager, he used media to launch a successful campaign to get the local Madison school district to cancel their exclusive contract with Coca-Cola, which promoted students drinking an inordinate amount of soda, he said. While in high school, Wikler was also using his underground newspaper to tell jokes, which eventually lead to headline writing for The Onion and working with Franken on Air America.

“I experienced both one of the like, really exciting and fun journalistic start up experiences, and one of the kind of most disastrous media implosions of the last decade,” said Wikler of his time at Air America.

Unfortunately, the primary investor in Air America turned out to be a con artist, literally. Many of the other leaders of the project weren’t familiar enough with the radio business model to make it work, Wikler said.

Still, Wikler learned a lot about organizing Franken’s followers, primarily people who were angry at the Bush administration. At one point, Franken went on tour around the country, and Wikler was astonished to see that a radio host on a struggling network could fill 1,500 seat theaters, even in the middle of the day.

“You could do a show that is entertaining and engaging, but then actually participatory,” he said.

Wikler is in the midst of a relaunch of his current show, The Flaming Sword of Justice, but he would like it to be participatory like Franken’s old show. He primarily has guests tell stories about how they got involved in different campaigns and causes, such as the fight for marriage equality.

“What’s amazing to me is these people who spent years and years, or decades, fighting these battles that seemed super hopeless for a very long time,” he said, “The stories that really land in the deepest place for people are David verse Goliath stories.”

“The world is actually full of those stories, and I want to bring those forward,” Wikler said.

Check back in with the podcast to hear Part II of our conversation with Ben Wikler, where he talks about his relationship with the late Aaron Swartz, one of the founders of Reddit.