This is the second part of an interview we did with Ben Wikler, a social activist and host of The Flaming Sword of Justice podcast. Wikler got his start in media working for Al Franken, a comedian who now represents Minnesota in the U.S. Senate. You can listen to the first part of this interview here.

Ben Wikler was working in a shared office space for nonprofits in Cambridge, Mass., when Aaron Swartz, a well-known Internet activist best known as the co-founder of Reddit, moved into the room next door.

The pair’s mutual interest in progressive politics and technology led them to become friends and work on launching the talk show that eventually turned into The Flaming Sword of Justice, a podcast that Wikler now runs on his own. 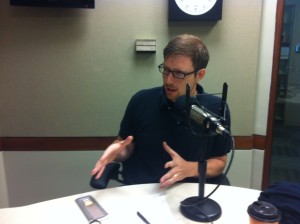 “Aaron was one of the most brilliant people in the millennial generation. He was 14 when he helped create RSS. He was one of the co-authors of the RSS specification, which is how websites talk to each other basically,” said Wikler.

Last fall, Swartz committed suicide at the age of 26 while facing criminal charges for hacking into MIT’s network and taking academic articles from a database called JSTOR. He intended to make the articles, which were stored behind a pay wall, free and available to the public online.

According to Wikler, Swartz had met academics from other countries who couldn’t afford to pay the subscription fees to JSTOR and had their own academic research hindered because of it. He thought this was an outrage and wanted to make the material more readily available.

“He thought if they were making things worse for everybody and he could change them, then he just should,” Wikler said.

But Swartz was caught downloading millions of academic articles illegally on the MIT campus, a breech that lead to multiple felony charges for him. At the time of his death, Swartz was facing the possibility of 50 years in prison because of his JSTOR hacking, consequences he had never imagined would be on the table.

“They set up a security camera and did a whole stakeout. … They chased him down in the middle of the street and arrested him. He was strip searched, and they, like, ransacked his apartment,” Wikler said.

In spite of the legal charges he was facing, Swartz pushed forward with the show with Wikler. The pair moved to New York City and started working out the activist organization Avaaz’s headquarters.

Wikler and Swartz eventually landed a spot on a new radio station broadcasting in Washington, D.C. For five months, they recorded the show every Sunday morning at 8 am in Wikler’s Brooklyn apartment. Unfortunately, as the show progressed, it seemed unclear whether Swartz – still facing criminal charges – would be able to stay involved moving forward.

“The first day that I saw down to start planning out the new show, Aaron committed suicide. So this year has been really hard,” said Wikler.

“Everything I do that is related to the show, he’s still in the room,” he said.

Ben Wikler – Activism with a punch and punchline – Part 1

Wikipedia’s Andrew Lih on transparency and what’s next