BJ Koubaroulis was writing about high school sports for The Washington Post when he saw “writing on the wall” about the newspaper industry and decided to make a change. He put down his pen – at least for a little bit – and picked up a video camera.

“I got my first camera off of craigslist. Fifty bucks,” said Koubaroulis, who ended up doing video pieces on high school sports for The Post. Eventually, he founded Synthesis Multimedia Productions, a private video production and digital strategy company, in Northern Virginia 4-1/2 years ago. 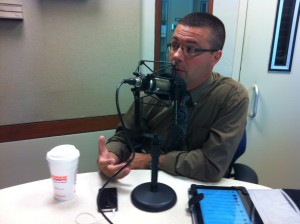 “In this digital day and age, when all of your resources are online to help you start a company and to take those steps. The business model, and starting the business, was not actually as hard,” he said.

Koubaroulis has about seven to 10 “backpack” journalists that he can dispatch to cover games and events. Within two hours of the end of an event, his staff member can usually have a video story up on the client’s website. The Synthesis Media team takes the same approach to the subject matter, whether they are shooting for The Washington Post or a commercial client, like George Mason University.

“We are not video people. We are journalists with a video camera. That is very important to me, because we have taken that style of video storytelling, and we have not only done it in the journalism world, but we have done it in the marketing world and in the small business world,” he said.

In January, Koubaroulis launched a new product, DMVSTREAM.com, which broadcasts high school sports live online with a professional play-by-play operation. The stream can be viewed on a computer, tablet or mobile device.

“When you get an email from a Georgetown Prep kid’s dad who watched a game from Afghanistan in a hole somewhere, it’s pretty touching,” he said.

DMVstream.com is also proving to be more successful than Synthesis staff could have imagined. Within its first six weeks, the site racked up 100,000 clicks.

“I am a high school sports buff in this area. I’ve been doing it for 10 years. I’ve never seen numbers like that. I was shocked, and when I saw that, I started taking all my money and pushing it into the middle of that table,” Koubaroulis said.

DMVSTREAM uses crowdsourcing to determine which games it will broadcast live each week, which is one of the reasons it is drawing so many clicks. The public chooses the games Koubaroulis’ team will cover by voting in polls posted on the website.

“We did a poll where 10,000 people voted for the Flint Hill/Potomac School game,” he said.

Koubaroulis doesn’t ever think that DMVSTREAM will be a money-making operation by itself, but the service does attract clients to his company. People familiar with DMVSTREAM will hire Synthesis to broadcast commercial events, and the money made off of commercial clients can then be used to support passion projects, like DMVSTREAM and other sports related coverage, he said.

“The point is that [commercial work] pays very well, and that money we put back into DMVSTREAM to pay people to work on that project to continue to make us other clients who want streaming,” he said.

Koubaroulis, who was previously the host of local radio and television shows about high school sports, said it’s important for young journalists to have a range of skills – including writing, Web development and video experience.

Koubaroulis has also learned to invest much of the money he made off of Synthesis back into the company right away. In order for Synthesis to grow, Koubaroulis was going to have to devote some resources to it.

“My days are spent on eBay searching for things that I might need that might help the company,” he said.

Read a transcript of our interview with BJ Koubaroulis.