I’ve mentioned many times on the It’s All Journalism podcast that I’m something of a comic book geek. 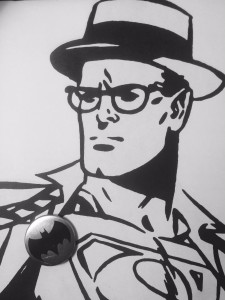 I was a freelance writer for the first 15 years or so of my career, writing about comics, collectible card games, movies and Japanese animation. My first professional journalism sale was a 1984 interview I did with comic book artist Walt Simonson and his comics editor/writer wife Louise Simonson in 1984.

Even though I’ve moved more into the mainstream of news coverage, I still have an interest in what’s going in pop culture.

For that reason, I was stoked to see the new Hollywood blockbuster, Batman v Superman: Dawn of Justice. I liked the movie, though I recognized there are problems with it. What surprised me though was the number of critics who panned it, including my friend and recent podcast guest Jason Fraley. In his review for WTOP radio, he gave the film two out of four stars.

Anyone who’s been in a newsroom knows that’s where you have some of the greatest conversations/arguments about the most important and not-so-important things — politics, elections, sports teams and movies, etc.

That’s what happened to Jason and me recently, about Batman v Superman. Thinking like a podcaster, I recognized this debate over the merits of the film was good content, so I invited Jason down to the studio to record this special, bonus episode of It’s All Journalism.

I recognize that our conversation is only tangentially journalistic in nature, so I hope you take this episode in the spirit it was meant to be, a fun but serious debate about a not-so-serious topic.

Stick around too for a special guest appearance by a Marvel movie villain — really!