WASHINGTON – Amy Webb has made a living out of looking forward. The owner of Webb Media Group predicts the technology trends that will be driving us socially and in business two to seven years from now. And she isn’t surprised journalism remains behind the curve.

She was inspired as a young reporter by technology working in Asia. When she continually ran into mentality road blocks in her newsrooms when it came to technology, she realized she’d prefer to be ahead of the game than behind it. 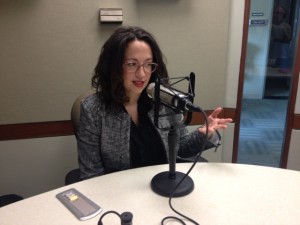 Amy Webb, CEO of Webb Media Group, talks to It’s All Journalism about data, dating and how journalists need to be looking at technology seven years down the road. (Photo by Michael O’Connell)

Point in fact, the idea of designing news content for screens. It’s something she says is on it’s way out.

“So while journalists desperately try to catch up and program for their iPhones as well as whatever else they are doing on air, that’s all well and good. But, I can point you to like 100 companies in the Valley who are all creating devices and applications and scenarios where there are no traditional screens. And the best example of this is Google Glass,” she says.

Media companies need to spend more time thinking about consumers and not about getting better at the status quo.

“It comes back to you know, now is the time for news organizations to start thinking not about how can they program to the devices that exist today, but what do they do to prepare themselves for two to seven years down the road when the normal ways of telling stories, the normal ways of gathering content in order to tell the stories will be radically different,” she says.

She talks about the so-labeled “new” news organizations like Circa that are re-envisioning how to pursue and present news.

It’s not just the companies. Journalists need to plug into how technology is changing and what that will mean for their storytelling in the future she says.

“Things are going to be very, very different,” she says.

In the podcast, Webb also talks about the upcoming Spark Camp, the future of social media and why video is the medium of the moment.

It’s All Journalism launches partnership with Association of Alternative Newsmedia