WASHINGTON – Get motivated by the change that’s happening in newsrooms, or get left behind. That was part of the conversation during our talk with Clinton Yates, local news editor for the Washington Post Express, writer for The Root DC and co-host of the 3 Wise Men podcast. 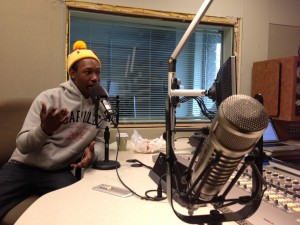 Yates talks about getting his start in the business in sports before realizing his passion for sharing his own experience in editing. (Photo by Megan Cloherty)

“Is there pressure to get along other platforms? I guess. But if you don’t feel the pressure and you’re in the business, I don’t really know what you’re there for,” Yates said in the podcast recorded on Dec. 8.

He has the mindset of a multimedia journalist but came about it in a very organic way, by taking on each platform as his career branched off to new mediums.

Yates grew up in the District, an experience that shaped his voice as a reporter. Having personally experienced the transitions of the city in the past few decades, Yates entered the world of journalism with a confidence normally found in beat-weary 30-year reporting veterans.

Knowing the city’s evolution informs Yates’ reporting and gives him perspective he says he would never ignore.

“If you don’t remember what it is that you know, there’s no real point in reporting. At least not to me. It’s not just to me about walking into a room, hearing what someone says and writing it down. It’s a lot more than that … Especially, if you’re going to be reporting in your home town. That’s the whole advantage that you have being from here. You know things that have happened before you walked into the room,” he said.

Yates has been at the Washington Post since 2007. Before that, he started his journalism career by following his natural interest in sports. Yates got in touch with ESPN’s Michael Wilbon, who quickly became a mentor, who connected him with the late George Michael and an internship at The Sports Machine at WRC-4 in Washington, D.C. That is where Yates learned an important lesson that has stuck with him; do what it takes to be the best.

“I mean, he was a serious, serious taskmaster because he wanted to make sure that he was the best. To me, that was one of the best things I ever learned in the business was. Pressure is whatever you want to make it. Some people just consider it motivation to get to the top,” Yates said.

Transitioning from sports to a career editing and opinion writing has moved quickly for Yates, who says he never had trouble adapting to the daily change in medium. For the Express, he has to plan the print content that will appeal to a Metro commuter short on time. For the Root D.C., he has to speak to a culturally unified audience interested in community issues online and on his podcast, Yates is reaching a young audience with humor on iTunes. 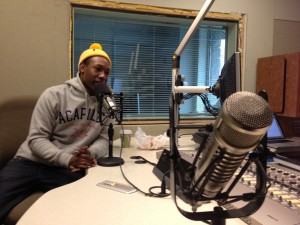 “What I try to do is, I try to keep abreast of this so that when I’m presenting my content, I’ve found the best voice for that particular channel. Again, I really wish I could describe that better, but it requires a lot of work and paying a lot of attention to things that are actually effective and trying to find the right blend for your own recipe.”

On social media, he’s found his voice easily. Yates said he’s often recognized for his Twitter presence (@clintonyates) rather than his journalism, but that doesn’t seem to phase the man with 3,220 followers at the time this article was written.

As for young journalists trying to build their own following and find their passion in this ever-changing career path, that’s just it Yates says, you have to be able to offer interesting content on whatever platform fits it best.

“The days of ‘Oh, I’ve got some sweet degree and a great GPA and I went to x-school …’ Nobody cares about that. If you can’t produce anything that anybody wants to watch, nobody is going to hire you. That has been the sort of big equalizer in journalism that we talked about with everybody being able to have at their hands and feet the tools that you can use to make something is that, if you’re really good at making something, you can get yourself into business,” he said.

As for his own career, he is hesitant to choose even one of the multiple paths he has in front of him now. Yates said he is focusing on the roles he has now, with the future in mind, but not jeopardizing his mindset.

“There’s part of me that feels like if I start getting caught up in things like that, I’ll not be able to do what’s required right now. You can shoot for a dream all you want, but if you’re not able to handle the day-to-day of what it is to even get there — Could I visualize a book in 20 years that is a collection of things that I’ve written about the city over the course of my career? Yeah, but if that happens, that happens. I’m not about to start doing anything today that’s going to sort of change how I would feel about that then,” he says.

Yates said he feels positively about the future of journalism and the way the industry is moving forward. The tools and resources reporters have now-a-days makes the job easier, he said and seems to truly enjoy the roles he gets to play in the business.

“Newsrooms might die or change in ways that we’re not necessarily used to seeing. But there’s no way that the power of getting information out to people is somehow going to go away. That just doesn’t make sense in terms of human beings. It’s just a matter of adapting technologically to make yourself available to people depending on what they’d like to touch and see and do,” he said.

#18 – Kate Gardiner: Time for journalists to take back their audience