Winning the 2014 Herblock Prize for editorial cartooning was a big deal for Jen Sorensen, whose work can be found in 20 alternative weeklies across the country. 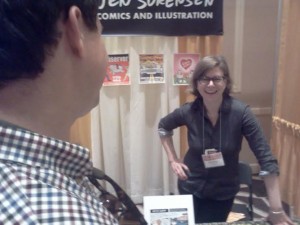 Jen Sorensen is a cartoonist whose political/cultural strip appears in 20 alternative weeklies around the country. Here, she’s talking to visitor to her booth at the 2014 AAN convention in Nashville. (Photo by Michael O’Connell)

“It was a big deal,” said Sorensen, who was the first woman to receive the honor. “It was possibly the thrill of my career.”

It also turned out to be a bit of an intimidating experience too.

“I had to give a speech at the Library of Congress, and that was a big deal,” she said. “Even though the weather was atrocious — there was a weeklong deluge in D.C. that week — there was still a lot of people there. Although I suspect it’s because Bob Woodward was the guest lecturer.”

The famed Washington Post editor, author and Watergate reporter told Sorensen that he admired her work.

Sorensen’s strip began its life with the title “Slowpoke.” Even though some of the alternative weeklies that carry the strip still call it that, the strips generally appear just under her byline.

“The strip is in the tradition of ‘This Modern World’ and ‘Life in Hell,'” she said. “It’s definitely an alt-weekly strip, you know, multi-panel, a little wordier than a traditional political cartoon.”

As far as subject matter of the strip goes, Sorensen tries to create a mix of cultural and political content that leverages her sardonic sense of angst.

“Sometimes I like to do a news story that isn’t getting enough attention,” she said. “I like to get away from the big headline of the week. I’m not always good at doing that, but if I can find some quirky little news story or something that needs some satirizing, some extra skewering, I see as not getting it, in an ideal world, that’s what I do that week.”

This is our first interview to come out of the 2014 Association of Alternative Newsmedia conference, which took place July 10-12, in Nashville. We’ll be posting more interviews from the conference in the coming weeks.